After our first report, now a few impressions of the event in the Classic Remise. Heavy: Heidi Hetzer told her about her journey around the world. 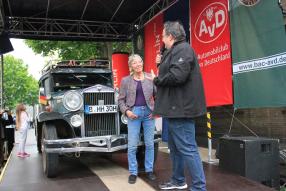 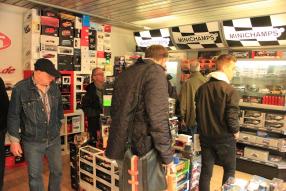 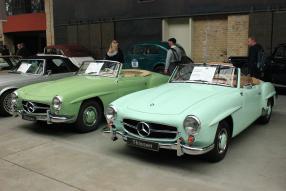 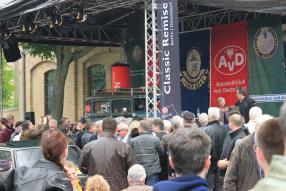 The weather didn't play along last weekend in Berlin: The cars, which were on the way to the 30th opening of the season and the oldtimertagen Berlin-Brandenburg to the Classic Remise in the Wiebestraße in Berlin's Moabit district, were greeted by rain. Later in the afternoon it remained dry, became warmer, and ultimately this situation turned out to be an ideal climate to relax and calmly devote itself to the old and even older vehicles. In our shop, it was so crowded at times that there were hardly any model cars to be seen - which pleased us. The highlight of the weekend in our opinion, however, was the performance of Heidi Hetzer and her Hudo; The classic car with which the Berliner, born in 1937, circled the world. The audience came in droves and were silent. Pure emotions!

In the forefront of the oldtimertage were, of course, the cars, of which the former tram depot had many to offer. The numerous visitors looked at the private cars in the glass boxes and strolled along the partly sinfully expensive Porsche 911 and Mercedes-Benz SL Pagode and 190 SL W 121 II. Interest in vehicles of these brands was great; We know that in the area of ??the modellautos yes no different. One reason to visit the Classic Remise at the Oldtimertagen is also the delicious catering: In addition to the classic currywurst, there was an excellent chili con carne to friendly 3.50 euros. The ride with the cage of a crane company, on the other hand, is free of charge: At 35 meters, the Steuermann des Korbes brings passengers who have a great view over Berlin. He could reach a maximum of 52 meters.

Heidi Hetzer in the Classic Remise

In the outdoor area: sales booths with repair instructions, car spare parts, advertising material or second-hand model cars: A junk market of the very best kind for fans of old cars. Heidi Hetzer is one of them, with her Hudson Great Eight from 1930 around the world. Launched in the summer of 2014, she reached the Brandenburger Tor in her hometown Berlin after several forced breaks on 12 March 2017. It was clear that the entrepreneur and rally driver came with her Hudo classic car to the Classic Remise. There she chatted about the screws of the oil pan, some of the disoriented mechanics of Africa, who would simply cut the connecting rods into the engine, from pedestrians who could not afford a bus ticket and simply drove with her.

Heidi told her so loose, fluffy and entertaining about her world journey that it was wonderful to listen to her. He spent 20,000 euros on gasoline without sponsorship; With publishers they are currently negotiating. About a book about her journey. It was clear to the audience that these people especially admire the courage of today's 80-year-olds to trust in the vastness of the continents as a woman. Especially since her eight-cylinder cylinder called Colin needed more than once life-sustaining repairs. To Egypt she still wanted, so the former Opel dealer, who after the questionnaire simply sat in her Hudo and drove from there as if it were an Astra from the assembly line of the present. What remains the bottom line? A visit to the Classic Remise is always worth it. But if Heidi Hetzer is there, he goes right into the heart.

Click here: More information about this topic in the preview