The model car in size 1:18 offers a first class reconstruction from motor and drive-schaft of the last winner from Lotus in the formula 1 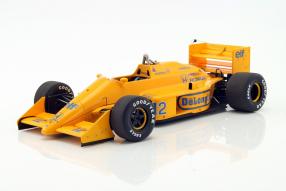 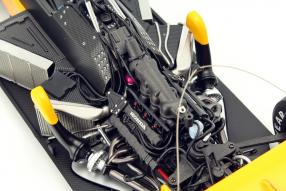 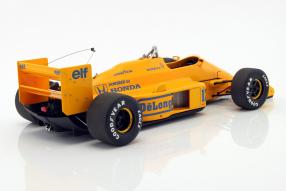 This weekend, many friends of Formula One will be attending live broadcasting from Chinese Shanghai, where the king class of motorsport will be in the second round of this year. The overall question: were the performance and victory of Sebastian Vettel in the Ferrari SF70-H in Melbourne a one-day fly? Mercedes-AMG Petronas F1 Teammanager Toto Wolff: "Australia was the first weekend under the new technical regulations, with a new car, new tire and a new driver, and we have gathered a lot of information that will help us in our future deliberations To make better decisions. " By the way, those fans of high-class modellautos make a good decision when they buy the today presented Lotus 99T in the 1:34 scale by Autoart.

You want to know why? Because the camel team Lotus Honda model from the 1987 season is one of the best miniatures on the market for # F1. Of course, the price of around 250.00 Euro is not a bargain - models of this size according to current models of Minichamps or Spark cost half - but Autoart with the hood to be removed gives a clearly noticeable plus of model building technology, optics and thus fun the owner This incredible model. The proportions and the look of the model are, of course, just like the famous icing on the cake, but there is also the finely simulated Formula 1 technology under the large-area cover, which even gets a set-up.

Perfectly reproduced up to the smallest screw

Take a look at the pictures and admire the detailed chassis of the car developed by Gérard Ducarouge and Martin Ogilvie, whose monocoque was made of carbon-fiber reinforced plastic and was the first to have an active wheel suspension at Lotus. The drivers Ayrton Senna and Satoru Nakajima won two of 16 season races with the prototype, got a pole position and three fastest laps. AutoArt has an excellent understanding of the cylinder head, coolers, auxiliary units, lines and exhaust flow of the RA166E Honda V6, which is the result of its power of 1.5 liters of displacement, and thus delivers a masterpiece that no technically enthusiastic motorsport enthusiast can afford . Only a current Mercedes-AMG Petronas F1 W08 from 2017 with removable hood could still beat it.