True Scale Miniatures has completed a fabulous model car in large format, which is an ornament for any room. 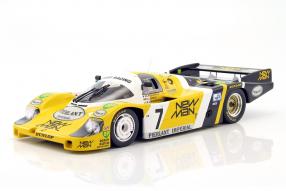 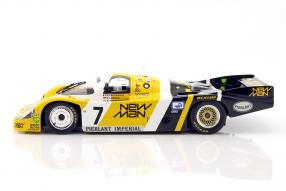 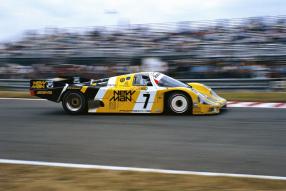 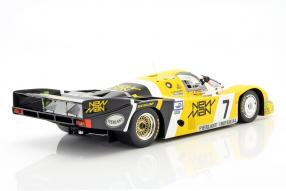 Those who have petrol in the blood but do not have a model car collection, can now enhance their living room or study with a real bang: the model car after the model of the Porsche 956 B, with the drivers Klaus Ludwig and Henry Pescarolo after 360 rounds the 24 hours of Le Mans won in 1984; Something that Klaus Ludwig and the Porsche 956 repeated in 1985. The makers of TSM or True Scale Miniatures have earned a place at the very top of the podium of the Modellauto building, because the Porsche 956 Langheck of the team New Man Joest Racing, which comes on the market in the 1:12 scale, is an outstanding testimony of real model building -Can s. The Resine plastic, which is also limited to only 500 rare specimens, measures 40 cm in length.

New Man Joest Racing - Is There Something? Exactly, Joest Racing is one of those companies that have significantly influenced the history of the 24 Hours of Le Mans and, as an Audi Sport Team Joest, belongs to the Seriensiegern at the Sarthe. Reinhold Joest started his career as a racing driver with Bergrennen in 1962 before he concentrated exactly 20 years later on the new role as Teamchef. In the 1980s and 1990s, the team was successful in all long-distance races such as Daytona's 24-hour race, Sebring's 12-hour race, RoadAmerica, the 1000km Nürburgring and the 24 Hours of Le Mans; At that time on Porsche 935, Porsche 936 and 956. With the Bonner Klaus Ludwig, Joest was able to win the same car in Le Mans twice in succession in 1984 and 1985.

Joest Racing won the 16th round of the 24 Hours of Le Mans in 2014, making it the most successful sports car team in racing history. Which would lead us back to the model of our model presented in this paper. The Porsche 956 won all titles from 1982 to 1984 in the FIA-Sportwagen World Championship: in the ratings for both drivers and brands. The Porsche 956 corresponded to the regulations of the sports prototypes, that of the group C. The group C followed the group 6 and in contrast to this the closed coupés. The engineers for the Porsche 956 had to completely develop the engineers around Norbert Singer. Instead of the lattice tube frames used to date, lighter and more stable aluminum monocoques were used.

Porsche, however, used an aluminum chassis in shell construction, but unfortunately we are not allowed to look at it; Unlike in the 1:18 scale, in which models compared to this model comparatively unimpressive 26.67 centimeters. The finish, proportions and look of the racing car model are first-class cream; The varnishing and decoration are unique in their design. The cockpit not only replicates the shell construction of the 956 used for Porsche, but also every control element, every switch and the roll cage correctly. A special praise is earned by TSM for the reduction of the wheel linings and wheels, which were developed as a model in cooperation with Speedline. In the end, it is important to note that the 956 is a living room or an office like no other big model. Well done, TSM!