Considered a classic among sports cars brand Wolf in Sheep&#039;s Clothing: The M3. The basic version of the BMW Motorsport came out as an exclusive model in white. 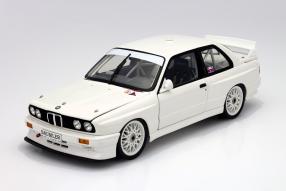 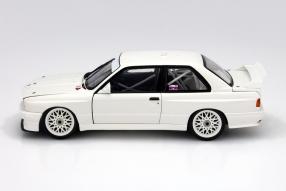 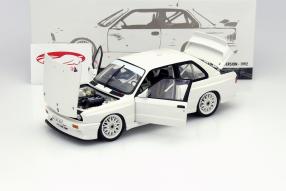 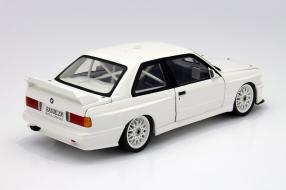 Wolf in sheep's clothing? Hold on! It is not so reluctant, the BMW M3 Series E30, which was built in the years 1986-1991. Fat Cheeks in  form of accentuated, nice  fender flares and a gigantic  spoiler give you a first glance at the purpose of the development: The BMW M3 of the first generation was created for homologation for participation in the German Touring Car Championship DTM  and first introduced in 1986. The basis of the M3 - the two-door sedan - has undergone major changes in this sense. The improvements were the driving dynamics, the torsional stiffness,and  aerodynamics, the  improvement of drag coefficiency. The viewer will notice by looking at the front spoiler of the M3


Changes in the BMW M3 compared to the two-door model

The developers did not have to pay attention to a certain budget, so it's said: to realize a victorious career that has been the M3 task. So it happened that the car received a redesigned rear, in which the rear window was made flatter and the rear lid made of plastic for the M3 was carried out 40 millimeters higher,which improved the  aerodynamics , and therefor and downforce and the grip. The side view is dominated by the wider fenders and the sills. Through the balance of his performance this M3 is considered the best looking edition of the BMW by many fans. Including the convertible -there has never been a four-door model of this generation - the first-generation BMW M3 sold 18,238 copies of all versions .


Lots of details on the model

That  model car  of this post in 1:18 scale, painted white,  is brought by Minichamps  as an exclusive, limited edition of 500 copies  for ck-model cars. It scores above all by being made of zinc die-casting: As a result, doors and hoods can be opened. And that's a good thing because the model car has a lot of nice details to offer; Details such as the quick-release fasteners on the front hood, which can only be found  in motor racing. The roll cage in the almost empty interior has been woven exactly. The only seat is the one of the race car driver whose bucket seat is modeled prototypically. The design of the dashboard and the instrumentation displays - very good to see in  the video of this post - are a real image of the command center of a race touring car.

Great crafted model of the engine

The hood tilts  forward just like on the original and shows a brilliant replicated engine with many, contrasting details and built to the highest drafted ancillaries. As engine in the M3 a derived from the engine block of the BMW M10 and cylinder head of the BMW M1  six-cylinder engine originally used in the BMW M88 four-cylinder four-valve engine with the designation S14 was used,  first as S14B23 from 2,302 cubic centimeters 143-158 kW / 195 to 220 bhp, later from 2,467 cubic centimeters and the Sport evolution 2 175 kW / 238 hp  (S14B25). The model car available under item no 183922000  costs  119,95 Euro and offers the Minichamps typical high standard of steerable front wheels for racing on the desk.