With a commercial model comes a brand-new model car in the scale 1:43. The facts about prototype and model: Here! 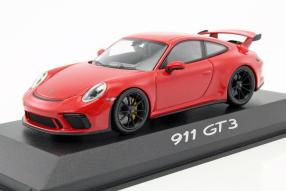 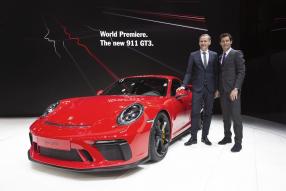 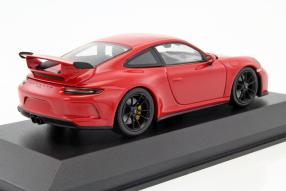 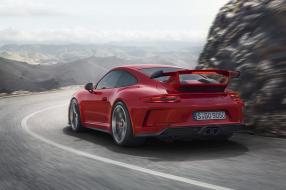 As promised, we are now returning after the Formula 1 weekend to the street cars. Porsche presented the new 911 GT3 at the 87th Geneva Motor Show on 7th March 2017, to which we already have Modellautos 1:43. Minichamps has obtained the license for the production of a fantastic miniature as usual and we supply you with the data as an example; Besides the assessment of the modellautos of course. This comes first under the item number WAP0201490H in the classic Porsche color Indischrot to the collector and costs with its 49.95 euro by far less, as the example: 152.416,00 Euro must apply, the 368 kW / 500 HP strong rear-wheel sports car In his garage.

The 911 series 991 II is in the area of ??the standard program domain of Herpa; The Aachener around Paul G. and Romy Lang were able to capture the top version of the series in zinc die-casting and thus get a piece of house supplier status from Stuttgart back. It is clear that proportions, look and look are exactly the same as the design of the model. The finish of paintwork and car body details offers no grounds for criticism. The rear wing and air shafts are also minimized, as well as the sporty interior with its fittings, the side panels, the covered rear seat troughs, the center console and the instruments. We have a lot of pleasure in the craftsmanship with which the front linings of the air intakes, the small chips drumherum and the interior life of the headlights were executed.

What does Porsche say about the new 911 GT3?

Minichamps also scores with the reproduction of tires, brakes and light alloy rims. Painted in a silky black color - as with the model - these cost as an example slumber 1.011.50 euros extra charge. But how does Porsche see its new vehicle? "The new generation of the radical Elfer combines an even more intensive connection between everyday life and the circuit, with the new 4.0 liter version being the focus of the further development of the Porsche 911 GT3 The high-revving sucker comes almost unchanged from the pure-race racing car 911 GT3 Cup. " The revised chassis with rear axle steering and the systematic lightweight construction are specifically designed to convert engine performance into superior driving dynamics, according to Porsche.

The manufacturer: "Developed on the same test track and built on the same production line as the racing cars, Porsche's motorsport technology is again being integrated into a street-legal sports car." The overwhelming number of Porsche GT sports cars is also used by their drivers on the circuit. With the standard twin-clutch transmission (PDK) specially adapted for use in the GT, the fully-fueled 1430 kilogram heavy-duty two-seater accelerates to 100 after 3.4 seconds. The top speed is 318 kilometers per hour. The version with six-speed manual gearbox sprints from zero to 100 km kilometers in 3.9 seconds and reaches a maximum speed of 320. We want a fast, safe start into the week!