03.03.2017The most beautiful Model cars to the subject Walter Röhrl

The rally world champion celebrates its 70th birthday and we present you the most beautiful models from the active time of the Regensburgers. 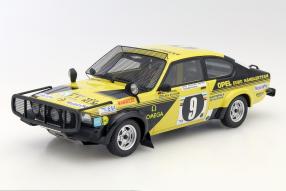 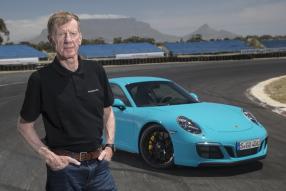 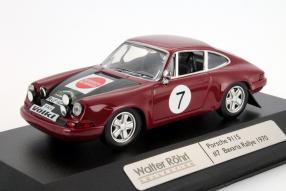 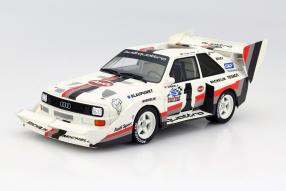 Just yesterday we gave you a brief overview of the career of the only German rally world champion - today we look after the model cars of Walter Röhrl, who will be on the next Saturday (tomorrow, March 4) at the Porsche stand of the Retro-Classics Stuttgart is: The chance for you to have your modellautos signed. The carton of the Porsche 911, with which Röhrl entered the Rallye San Remo 1981, offers plenty of space for an autogram, and to which the Ottomobile exclusively has an 1:18 model car for ck-modelcars - strictly limited by the way. The Otto label is a specialist for Walter Röhrl cars and has also reduced the size of the Opel Kadett GTE from Group 4 to the 1:18 format, with which Der Lange - his nickname - began at the 1976 Monte Carlo Rally. The races around the principality are the most important of all.

In this respect, it is a good thing that the specialists of Otto under the Artikenummer OT195 a really excellent model in very good finish on the wheels. The battery of various headlights is the blast, right? Röhrl and Jochen Berger took part in the Safari Rallye in 1976 with the same base vehicle, which was supplemented by a protective helmet in front of the bow and the windshield. The 1:18 model with the item number CK003 is limited to just 999 copies and is manufactured by Otto in the livery of the Opel Euro Team: Exclusively for ck-modelcars and modelissimo. The Röhrl-Porsche 911 RSR of the 964 series, with which the world champion participated in the 24 hours of the Nürburgring in 1993 (ZM061, GT-Spirit, 1:18), is also available exclusively with these partners.

The models of Top Marques, with whose model Walter Röhrl and Riccardo Patrese in the 1000 kilometers at the Nürburgring have also contested: the model of the Lancia Beta Montecarlo Turbo in 1:18 is limited to 200 pieces Limited (TOP MOD 21). The 6 hours of Brands Hatch 1980 have won Patrese and Röhrl with this wheeled undercarriage by the way: This model is available from the same manufacturer under the item number TOP CK 21. Somehow it is just really exciting to rummage in our warehouse and the babies from the era Röhrl. Even with Autogramm von Röhrl come the models of the Porsche 911 S of the Bavaria Rallye 1970 and of the Lancia Stratos of the Rallye Hunsrück 1978; Both in scale 1:43 of Ixo and thus comparably favorable (CCC206, CCC205).

But what would Walter Röhrl be without Audi? He returned to San Remo with his co - driver Christian Geistdörfer in 1985 and won the rally with the Audi Sport Quattro S1, to which Otto once again built a fantastic model car: even on a large scale 1:12, showing great details and a pleasure for every fan of the Motorsports (CK002) - exclusively at ck-modelcars. Watch it, up in the video! Röhrl won the same basic vehicle at the Pikes Peak Bergrennen in 1987, where the Ottomobile used a 1:18 scale monument (OT171). As you can see, Walter Röhrl has written motorsports history, so there is nothing like retro Classics Stuttgart. You will find us in the entrance hall. We look forward to seeing you there and wish you a nice weekend!