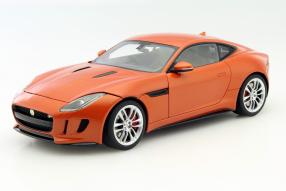 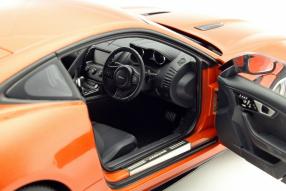 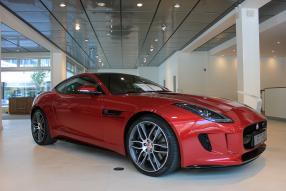 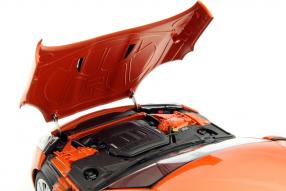 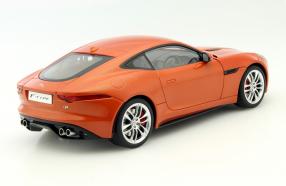 Meanwhile, we have posted 442 posts on this blog, presented to you the most diverse Modellautos and their role models. But we are always stumbling about a circumstance that is so powerful on our nerves: the so-called self-writing. But before we go into it, let's take a look at a really great model car, the Jaguar F-Type in 1:18 scale. With this car, AutoArt has made a good choice because the racecourse makes a real good figure on the street as well as in the showroom and the showcase at home, seducing you to get on and off. The model was launched in 2014 on the European market and is considered a successor to the legendary E-Type, but in contrast to this, it is short and crisp. Autoart introduced the version R Coupé now also in Firesand-Orange-Metallic.

Thus, the model is numbered 73653 the fourth, because the models made from die-cast zinc are already under the item number 73651 in polaris white, under 73652 in Ultimate Black black as well as under 73654 in ammonite gray gray. What is common to all of them is that they display the right-angled version and offer all-opening doors and hoods. Under the front-mounted bonnet with the beautiful hinge is a replica of the more powerful, more powerful, eight-cylinder engine launched in 2015. Its prototype of 5.0 liters displacement delivers 405 kW / 550 hp and 680 Newtonmeter (Nm) generates maximum torque. The sports car is available with all-wheel drive as well as rear-wheel drive and sped in 4.2 and 4.1 seconds from zero to 100 kilometers per hour; Top: 300.

The model of the Jaguar F-Type R in detail

The model car of the F-Type R corresponds to the high standards as we know it from AUTOart. In addition to its highly accurate fit into the body of Diecast-fitting functional parts - such as the doors to be opened - an interior design exactly matched to the original and a detailed engine compartment with all important, clearly recognizable units. Of course, the trunk is too open and lined. Let us look at the body from the outside: Extremely successful fit of the moving parts into the outer skin! Knife sharpening of dividing lines and joints! First-class detailing in the area of ??the front apron and the headlights or their inner life! The company logo as well as the R logo in the grill! The sill is protected by an aluminum bar on the model as in the model.

The replicas of the 20-inch light-alloy wheels in the Gyrodyne design do not obscure the red-colored brake calipers of the high-performance brake system, as Jaguar. The sports suspension of the model is equipped with adaptive dampers called Adaptive Dynamics; The most important details were met by AutoArt. In the interior, we are convinced by the hair-style replica faucet panels along with the seats and the center console, so basically everything. In doing so, AutoArt has also paid attention to the correct structure of the models made in carbon optics; As well as to emphasize the control element parts in color. The shape of the 'R-Performance seats, the three-spoke leather steering wheel with silver shift shifters, the center console in Dark Linear aluminum with R emblem have found in 1:18 great pictures.

Our conclusion, therefore, is how it must turn out: the best score for the AUTOart_models model. But now on the topic of self-writing, which makes us look like illiterate. Marketing men are never directed by the spelling rules in the spelling of their names. We have found the name Autoart - so it should be written - in so many variants that we no longer know what is right or wrong. The so-called word marks may, for example, But this is quite unaesthetic in the typeface. On Twitter the label AUTOart writes, on the boxes as well, but it is synonymous AutoArt in circulation. Terrible, is not it? So, do not scold us if we do not hit every name. Is not our intention.