GT Spirit is parked with the wide body models of the Japanese tuner Rauh world concept two real blast in 1:18 with the showcases
. 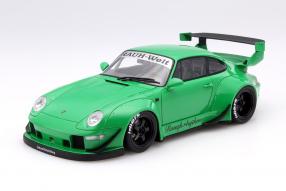 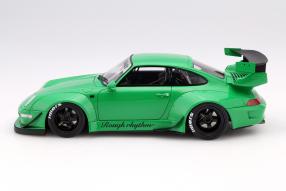 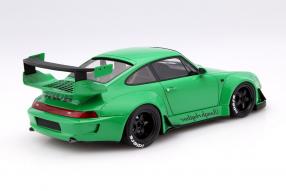 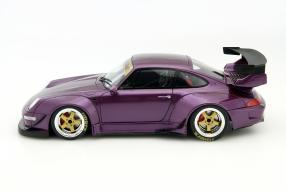 Don't worry, on the Day of German Unity, here on the blog we don't want to be political, but we thought that it would be appropriate to make this our topic about a ur-German car. Ur-German cars, as there is in our opinion, only two: the VW Beetle and the Porsche 911. How nice that GT Spirit has taken the nine-eleven in a manner that is one part of the openness and tolerance of our country and on the other hand color in the gray everyday life brings. It's nice that entrepreneurs from Japan love German cars and identify with them: That connects, manages mutual friendships and sympathies - it's nice to be seen even in this example, is to what unity Germany again merged with the world. And what color is concerned: The we can in imminent use mostly tristeren autumn good.

GT Spirit delivered from the reductions of two Porsche 911 series 993, having the tuning workshop of Japanese tuning company Rauh world through concept. While stay - as usual in Miniatures resine plastic - doors and bonnets closed, but it already has the exterior a lot for the eye: wide body pure. If one (s) his ears and listens in the tuning scene, then it should be noted that the fans of the more extreme variants of the sports cars from Zuffenhausen fall into sheer ecstasy when they think of the work of company president Akira Nakai: Classical Porsche 911, by a brought bodykit of resident Japanese tuner Chen Rauh Weltbegriff or shortly RWB in an extra-wide format and conceptually almost turned into a race car. The cars are unique and even receive names.

The models of GT Spirit form to the vehicles "Second Development" and "Rough Rhythm", as read by the word, nose, tail and sides. The finish of the miniatures is of a superior work, as we know it by GT Spirit. Only the indicated rivets on the fender flares we must perhaps used to, but it is at Akira Nakai, the European Tuning with elements combines Japanese and another found in PS-Profi Sidney Hoffmann also a representative in Germany. The Nakai incidentally invited to Dortmund, where the Umbauer even hand docked at Hoffmann Porsche called "Furusato" whose powerful double-spoiler named Royal Champion Wing. but GT Spirit adopted exemplary Also the elaborate replica of the interior of the cage and racing seats.

"Second Development" is limited to 3,000 copies, "Rough Rhythm" in which 1,500. The wheels and brake system can not be found so the standard miniatures by GT Spirit. The car models are with their heavily revised Bugschürzen together with spoilers and side splitters so genuinely unique and should also provide with their color for a eureka moment in the showcases. Unique are also the models; no WARC kit alike. Akira Nakai is on his home visits to customers who already have a air-cooled nine-eleven must be call his own - later 911 does not touch the tuner. but this he mixes on the engines: Up to 1,000 hp saying the car after.

Joy at the unit

To conclude this article we repeat: Yes, we look at the Day of German Unity also about how the world can be united through the love of the car. A great day we wish you all!