26.09.2016Ferrari F40 celebrates its comeback with Kyosho and Minichamps

With him everything actually began: Bburago made the 1:18 scale with the model of the supercars only popular. Now comes a new F40. 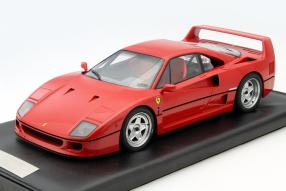 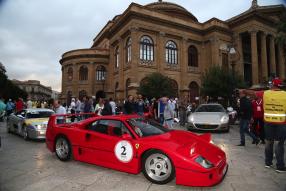 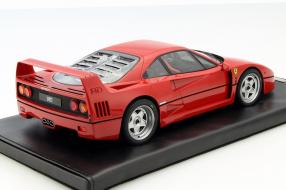 Yes, folks, it has been so long ago: 1987  the Ferrari F40 first saw the light of day. At this time was even the Berlin Wall there, the turning point had not yet occurred. The super sports car made by Ferrari was built up in 1992 and was through the use of racing technology as its body parts from carbon fiber reinforced plastic as the latest state of the art. The car was created for the 40th anniversary of the company and was the last Ferrari, which was developed under the direction of company founder Enzo Ferrari himself. Not only visually, but also by the performance ago he formed the spearhead of the program, because he was the hitherto fastest and most powerful Ferrari for road use. Bburago built the model car to: In 1:18, diecast and with opening doors and hoods.

Today, however, we must renounce these same functional parts, but can you present the new F40 Kyosho a particularly fine piece Model car Can that appears in the distribution of Minichamps. As never before, the body lines of the mold makers have been worked out perfectly from the Far East; the appearance of the design of the prototype is so well made that you think you would have to do with the real vehicle, if you look at the model from afar. The fully glazed engine cover - plexiglass, it was the prototype - allows a sufficiently good look at the engine. The V8 contributed 352 kW / 478 hp and pushed at 4,000 rpm 577 Newton meter (Nm) maximum torque to the crankshaft. The top speed was given as 324 kilometers per hour, the curb weight of 1254 kg.

According to well accelerate the eight-cylinder engine, whose five runs were sorted manually. In line with the factory specifications accelerated the F40 in 4.1 seconds to 100 kilometers per hour, from zero to 200, he took 12 seconds. The model car by Kyosho parked on the other hand permanently on a high base plate and is made of cast resin plastic. Despite the slight material of small F40 weighs stately 2.458 kg and is thus difficult as high in his hand. On the quantities of the Bburago F40 Kyosho model will not come, but the collector receives something special; a small artwork with perfect SIMULATED interior that touches the crown of each collection of sports cars or Ferrari miniatures.