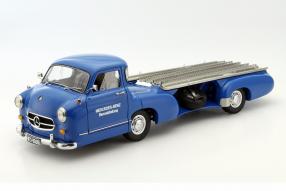 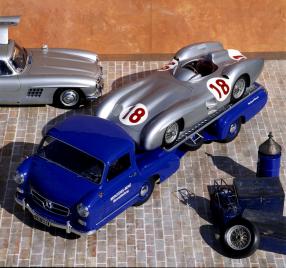 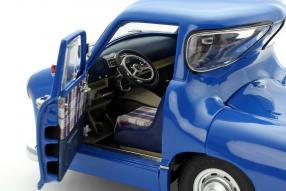 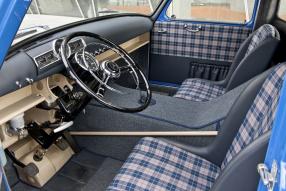 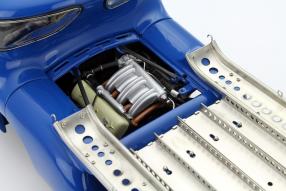 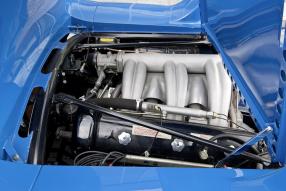 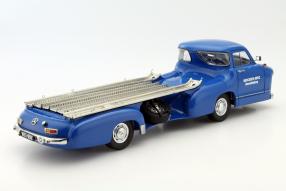 Model Cars by CMC are in terms of finish always something special. So expectations are high, as the announcement arrived that under item number M-143, a model of the Mercedes-Benz racing transporter from 1955 appear, which is world wide known as"The Blue Wonder". This is because of the special structure wrote with his idiosyncratic style motorsport history. The car had the time, the task of carrying out the transfer of the cars between factory and race track as quickly as possible, because it was to save time, to quickly put the fire engines to the next race repaired or to make faster. In order not to lose a lot of time, provide a very fast racing car carrier was developed to the CMC us now introduce another model in 1:18 scale.

In order to fulfill this task as quickly as possible, "The Blue Wonder" on a modified chassis of the Mercedes-Benz S 300 was constructed, in which the technicians planted a six-cylinder engine from the 300 SL. In this way, the driver of the racing transporter could not only have a good comfort in the cab forward, but possessed with the 141 kW / 192 hp and a respectable performance. In the top of the transporter drove about 170 kilometers per hour. 25 liters per 100 kilometers allowed himself "The Blue Wonder" at the sprint to work or racetrack. With its streamlined curves of the car makes it so even a really good, elegant figure. And precisely implement these curves in the so-called Bburago-scale, which is for model engineers always a challenge.

But one that CMC has dissolved well in this case: The appearance of the model car is exactly the same with those who give us the images of Daimler AG by model. Given CMC has done wonderful detail in the exterior mirrors, the sports grill and the replicas of the aluminum rails. Detailverliebt: The small straps that hold them. Very nice is also playing the almost luxurious interiors in which conspicuous especially the plaid seats. The instruments are traced to scale properly, steering column and pedals replicated prototypically. The Sitzkaros are also found on the door panels again. By opening doors of the model car made from die-cast zinc are freely to see the details. The headlights and taillights are reproduced technically high class.

The miniature "The Blue Wonder" is so great on its wheels, that you actually do not even have to collect car models to set order in his living room a special accent. Especially good is the car sets the scene, of course with a contemporary racing car on his hump, about a 196 W or 300 SLR. It hurts the one hand, that it no longer is the original no longer needed after the withdrawal from the race track, because it was scrapped in 1967, but in 2001 in Cologne created on behalf of Mercedes-Benz at MIKA, 180 kW / 245 hp replica the 100-year mark anniversary consoles over it. Something must have then unhooked atypical among men of Mercedes-Benz. The model car from CMC lives  in any case and we can give it to you with a clear Bestbenotung.