Often the collectors will be set before a choice: which model you should I buy if there are 2 nearly identical miniatures of the same prototype? With Video! 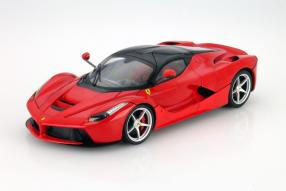 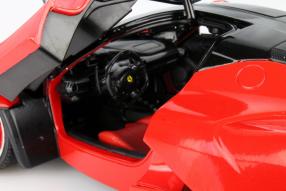 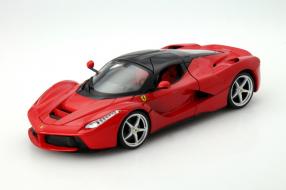 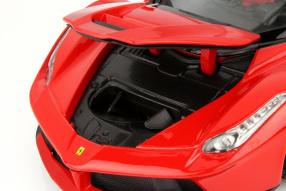 There are role models that just about everyone would like to have in their garage. This often leads to a competition between the manufacturers of model car for the contract for the production of an advertising model for the introduction of the prototype or for the license for its reproduction. Sport cars such as Mercedes-Benz SLS AMG, Audi R8, Bugatti EB110 and Veyron but also the Sport cars from Porsche and Ferrari belong to these desired prototypes. In the case of the Ferrari LaFerrari, that was presented  at the Geneva Motor Show and Accessories 2013, both Hot Wheels and Bburago obtained the license for the production of a scale model cars in size 1:18. By the way Bburago made this size really popular with the Ferrari F40 in 1988.

LaFerrari first production Ferrari with hybrid on board

In this respect the circle is completed, because the La Ferrari, as a top model from Ferrari, could be considered a successor of the F40. The LaFerrari is the first production car of the sports car manufacturer with hybrid drive on board: The HyKers system was derived from the cars of Formula 1. System performance amounts to an incredible 708 kW / 963 hp. The 6.3-liter V12 accounts for 800 hp. The LaFerrari can accelerate from 0 to 100 kilometers per hour in less than 3 seconds; less than 7 seconds is needed to get to 200 km / h; in 15 seconds 300km/h. The LaFerrari reached top speed at about 350 kilometers per hour. The monocoque and the body of the car are made of 4 different types of carbon fiber reinforced plastics.

These parts are manufactured to specifications of Ferrari in the Formula 1 department of the company. The butterfly doors are taken from the predecessor of the LaFerrari. In total there was only 499 copies produced and they are already all sold. The fans of model cars have it of course much better because there are higher numbers at lower prices. For the approximately 26 centimeters long model of the LaFerrari 1:18 from Hot Wheels, under item no BLY52, you’ll need 59,95 Euro. For the competitor Bburago only 39.95 euro. We now want to know whether it is worthwhile to invest a twenty more into the model of Hot Wheels and look at the two models therefore side by side - also in a video to the article.

Hot Wheels offers LaFerrari with interior detail faithful to the original, steerable front wheels and opening doors. The LaFerrari from Bburago, available under item no 18-16001R, offers also an authentic interior equipment, working steering, but scores despite lower price with opening doors and openable trunk and hood. Therefore, there is also a detailed replica of the Engine; to see by the way in the video mentioned earlier. For the service is Bburago clearly in front. Of course, for the buyers of Hot Wheels the engine does not remain hidden, for the glass pane of the rear hood allows a good view of the model V12.

Nevertheless advantage for Bburago: A higher number of functional parts at a lower price. But are there reasons to invest the additional twenty euros? Yes, there are. The finish of the processing, the paint and the execution of the instrument panel and interior of the Hot Wheels model is a bit better. Although both manufacturers take the lines and the appearance of the model exactly, the details of the inside of Hot Wheels are somehow better. Anyone who pays attention to better quality and a more polished appearance should pick the model of Hot Wheels - even if the quality of the Bburago is not so bad. Both manufacturers offer the model car of the LaFerrari in several colors. If the good finish of the models from Hot Wheels and Bburago are not enough and you can do without a look at the open parts, There are premium resine plastic models from BBR; as well as the great model in scale 1:12; In the bar below this comparison to watch. 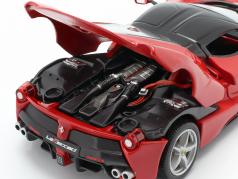 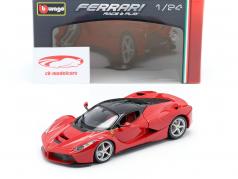