The 5 McLaren F1 GTR, which crossed the finish at the 24 Hours of Le Mans in 1995 do a parade lap 20 years later.The models are also available now. 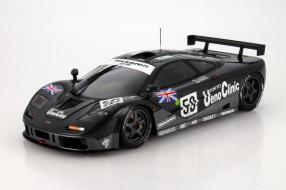 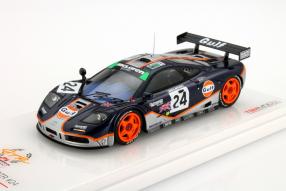 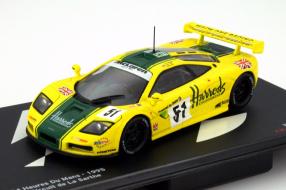 Shortly after the victory of Lewis Hamilton in Canada, we focus on France, more precisely on the small town of Le Mans, on whichs  race track the 24 hour race of Le Mans will take place this weekend. Friends and fans of  McLaren can  look forward to a very special celebration , the world premiere of McLaren P1 GTR . The brand celebrates the 20th anniversary of the legendary victory of the 24 Hours of Le Mans in 1995 with a unique performance at the French circuit.


The 5 copies of the McLaren F1 GTR - who  dominated the race in 1995 - are to be brought back to the track, including the winning chassis # 01R. For the first time since June 18, in 1995 shortly after 16:00 o' clock when the checkered flag fell, the 5 vehicles will be back together on the track. 20 years after the legendary victory reverse the chassis # 01R, 06R #, # 02R, 07R and # # 05R will be back for a parade lap around the  racetrack  before the lights of  the 83rd episode of the 24 Hours of Le Mans will turn green. The new McLaren P1 ™ GTR will lead the group; driven by the french,  former racing driver Yannick Dalmas, who was also in the ranks of the winners with the McLaren F1 GTR number 59.


His teammates J.J. Lehto and Masanori Sekiya will also participate in the parade; together with owners of the limited edition of the Le Mans 650S. And their exact winning car is still available: from Minichamps reduced in scale 1:18 and - listen, marvel and enjoy - not resine but die-cast zinc and thus with opening doors and hoods. The model car with the start number 59 resembles  the vehicle of the Kokusai Kaihatsu Racing team, which was controlled by Yannick Dalmas, Masanori Sekiya and JJ Lehto to the top position of the podium. The McLaren F1 GTR Ueno Clinic has an authentic interior equipment, a detailed engine compartment, steerable front wheels and is brought to you  in a Limited Edition: For 99.95 euros at ck-model cars .


Friends and fans of McLaren can take part in the celebrations if  they follow  the hashtag # McLaren95 and participate in the discussion on the McLaren social media channels. But there are still more succesfull model cars available from 1995: the car of Mark Blundell, Ray Bellm and Maurizio Sandro Sala with starting number 24 of the team GTC Gulf Racing in the Scale 1:43; the fourth place model  for 69,96 Euro under item no TSM124336 . The 3rd place, no. 51 from Team Harrods Mach One Racing -drivers where Andy Wallace, Derek Bell and Justin Bell-  IXO brings under number MAG FT 13 for now only  12,95 EUR instead 24,95 EUR also in 1:43 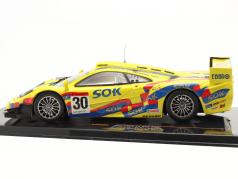