The two model cars GT Spirit, and also the dealers ck-model cars and modelissimo succeeded to make a hit . 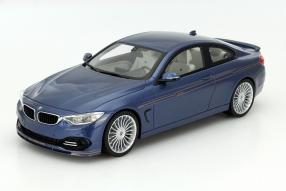 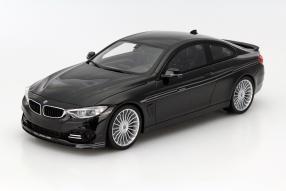 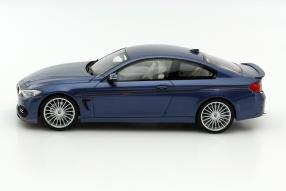 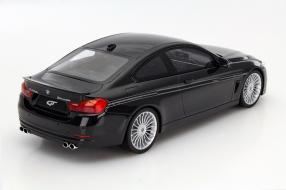 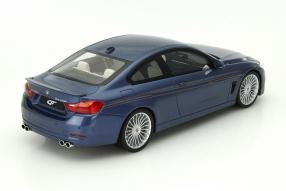 Cars from Alpina are very special: They are very classy, ??very athletic, very well equipped, very expensive and very rare. In 2 limited editions model AutoLabel GT-Spirit presents the fans of these small, German car brand with the BMW Alpina B4 an accordingly special car model that the exclusivity of his model corresponds to the finish and its appearance quite. Noble surfaces, noble range of colors and fine details make the model car to highlights in the showcases are. In one aspect, the black model over blue 1: 18er still far superior to a piece. It is exclusive to traders modelissimo and ck-model cars to have and nowhere else Nevertheless, it remains the common price each 89,95 Euro.

Alpina B4 Biturbo considered in detail

The reason why we call the model car in the headline the gem is that the appearance especially the miniature very high quality acts in tanzanite and the contours of the body seem honed as sharp resine plastic, as we know it from a gem , Although doors and hoods remain material will be closed, but act the engravings, which replicate the column and joints of the openable body parts so real that we must pronounce the mold makers kudos. This, incidentally, have the feel of the design of the model correctly transferred to the models and made the look of the Alpina B4 Coupes perfect. We are excited and the finish of the front end, in the very lines and edges of the bonnet, BMW kidney, apron and headlamps spotless another. The interior leaves out no detail of the original.

Who is behind Alpina?

GT Spirit has not failed, the install for Alpina typical decorative strips on front spoiler, side and rear; a characteristic feature of the cars Bovensiepen Family, called the charge of the vehicle company on 01 January 1965 to life. Company founder Burkard Bovensiepen is the management before still, but is now supported by his sons Florian and Andreas. The company's history began in the 1960s, when success as a tuner of BMW einstellten in racing. Since 1978 builds Alpina own cars on BMW basis; Since 1983 the company is registered as automakers. In 2014 Alpina built around 1,700 cars, were approved of which claims to 600 in Germany.

The recipe for success: The guarantee of BMW

Each 400 were exported to the USA and to Japan. 200 employees generated sales of about 90 million euros in the year, 2014. The success story that BMW always further, the warranty on the base vehicle can apply based. The Alpina arise today at BMW; Alpina delivers to the special conversion parts. With the wholesale of wines, the family business still operates a second foothold. Newest model is the BMW Alpina B7 Biturbo based on the new 7 Series, which is good for 310 kilometers per hour top speed with its 447 kW / 608 hp from 8 cylinders.

The prototype for our model car is powered by a straight-six engine, which develops from a displacement of just 3.0 liters 301 kW / 410 hp. Its maximum torque is 600 Newton meters (Nm). In 4.2 seconds the grenade accelerates to 100 kilometers; the maximum speed is given as 303 kilometers per hour. It is shifted by 8-speed Sport Automatic. The benefits are so Alpina, also available with xDrive in the BMW system based four-wheel drive, which is to ensure a high degree of traction and dynamic performance.