The small batch label has chosen the timeless classy Coupé a noble example and introduces the third successful model in 1:18 scale. 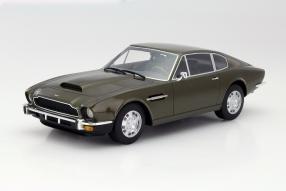 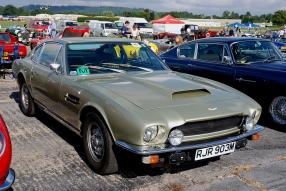 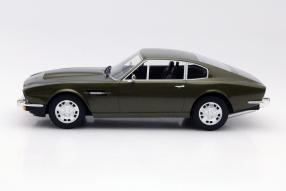 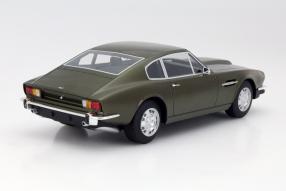 An Aston Martin is  considered a noble, elegant, sexy-racy and sporty vehicle that is of interest in the circles of the rich and famous. A model car of  such a prestigious car should be, like it's prototype, not a cheep imitation but a miniature, the reputation and standing of the car for driving on the exhibit for the showcase transfers. After the current line of Mercedes-Benz W125 world record holder and the Lamborghini 350 GT, the makers of the new small series labels Classicmodel Replicars CMR with the Aston Martin V8 Vantage devote for the third time a well-known model of historical origin. And have ended up playing the classic lines a direct hit.

The history of the model in brief

1967 Aston Martin DBS appeared as a two-door coupe and received in 1969 the V8 engine,  which the men who built it wanted to have it from the beginning. 1972 David Brown had to sell the shares in his company, which led to a revision of the front as well as the deletion of all references to the work of Brown on the vehicles: The Aston Martin V8 was thus born. In August 1973 Aston Martin drew a line under the problems with the mixture preparation by the introduction of 4 double-downdraft carburettors from Weber and enlarged the air scoop on the hood. Exactly these optics, CMR will become a model for the Aston Martin V8 in 1:18 scale, the wish to deliver its makers in resine plastic and build on the success of the two first-models.

Considered the model of the V8 car in detail

No question - the front of the Aston Martin V8 applies to fans of the British car brand as one of the finest ever: Classic and have a relatively timeless It could not be. The lines of the Aston Martin V8 acts beyond elegant and unobtrusive, yet clearly present. CMR has the appearance of the model skilfully how knowledgeable implemented in the scale of 1:18. The headlights blend impeccably into the body; Glazing, the patch wipers, chromed door handles and exterior mirrors give no cause for criticism. The simply drawn tail shines with precisely this simplicity and straightforwardness and is decorated by the two exhaust tailpipes in chrome and tail lights multicolored executed.

The conclusion to the Aston Martin V8 of CMR

Large-scale timber on the dashboard came only with the Series 4, the Aston Martin started to manufacture 1978th In this respect, the predominantly black finish matches the look, the interior of the sports car has commanded at times the series. 3 CMR has so here very spy closely and reproduced the intricacies of the interior of the model from 1976 exactly accordingly. As is customary in high-quality small series models from the easier for the mold makers to zinc diecasting to be processed polyurethane casting resin Resin remain closed doors and hoods. The inspection of the interior does not harm the; from pretty V8 with its 183 kW initially / 248 PS is unfortunately nothing to see. Our conclusion yet: A great model that imagines CMR; an ornament for each collection and the third hit of the young label.