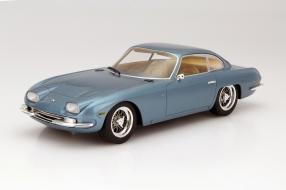 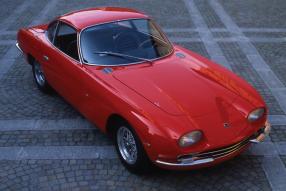 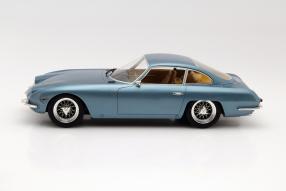 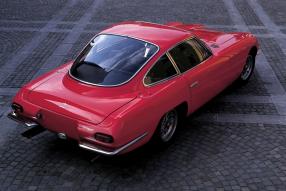 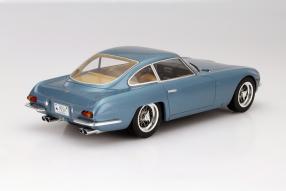 A new model car label on the market must face particularly critical eye; especially if it takes on a famous prototype. After the successful debut with the Mercedes-Benz W125 is dedicated CMR now the Lamborghini 350 GT, the first car of this car manufacturer, that come into the series production. This sports car in 1:18 scale convinces immediately.

The resulting modeled after the 1967 car model in light blue metallic shines not only in the paint, but also with an appearance which is that of only 120 units built prototype perfectly. As is customary in small-series model car also the Lamborghini 350 GT is made of SKU CMR002 resine plastic, making hoods and doors remain closed.

Based on: The Lamborghini 350 GT

The 350 GT scores not only with a fair and reasonable price, but also with a finish of the outer skin, which really enraptures us to rapturous applause: Score 1+ a relative newcomer for this on the market. A newcomer was also the builder of the model at the time when the 350 GTV came into the world at the Turin Auto Salon 1963rd Ferruccio Lamborghini was a manufacturer of tractors a large number, when he decided to build sports cars.

Whether it was because he was with the quality of his Ferrari is not satisfied and the decision itself to get involved in this area therefore met, which is now attributed to the myth-making in general. But the fact is: After the exhibition model with no power source followed by the built until 1967 series model, the 350 GT, the model for our model.

The vehicle was equipped with a twelve-cylinder with 4 overhead camshafts, the 206 kW / 280 hp from its 3.5-developed liters. This offered the Lamborghini more than at Porsche or Ferrari had to have and made it in just 6.4 seconds from 0 to 100 kilometers per hour. Depending on the translation of his transmission of the 350 GT reached a top speed 239-260 mph.

The design of filigree, glitz and glamor emanating cars came from Franco Scaglione; then no cool Karbon, but luxury and style at all levels was needed even in Spitzensportwagenbau. Built on a tubular space frame aluminum body let Lamborghini at the supplier Carrozzeria Touring build. The 350 GT came through the use of this advanced material to a total weight of only 1.4 tons.

The GT 350 offers space for 2 people; unless you ordered a jump seat in the rear. Unlike the former Ferrari, the 350 GT has independent suspension on all four wheels. Disc brakes were also completely blocked. With 53,850 DM purchase price he was one of the most expensive cars in those days; today it is traded with 500,000 Euros. Measured against the 99.95 euros, which costs our model car in 1:18 scale, even compared with other models in this segment are favorable.

The finish of the outer skin is perfect, the chrome sparkle to the shine in our eyes to the bet. A dream are the instruments; Cockpit and instrument panel similar to the window of a jewelry store - as I said no cold high-tech as today. Who wants to know how the model looks: The video of talk show host Jay Leno's Garage has no longer at top insights into the 350 GT.