The Yaris WRC by the World Rally Team Toyota Gazoo Racing in scale 1:43 reminds on the WRC-season 2018. At the same time, the restart of the season is just around the corner 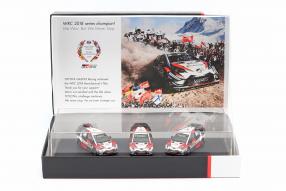 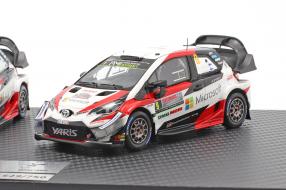 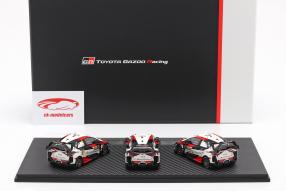 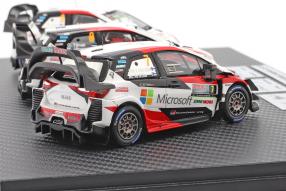 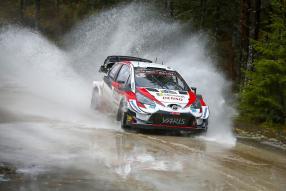 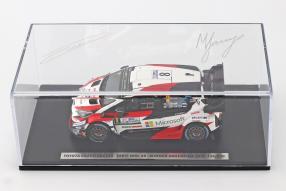 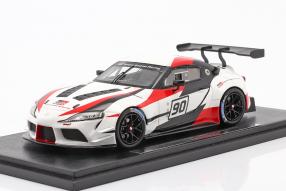 The team of ck-modelcars.de currently offers a fantastic opportunity for the friends of Toyota Gazoo Racing, to extend the collection of miniatures to the World Rally Championship - the FIA Rally-World Championship with the shorthand symbol WRC. The set of the Toyota Yaris with the starting numbers No. 7, 8 and 9 to the brand world championship WRC series 2018 is definitely high on the wish list of the fans: In the cockpit of the Yaris, which started for the Toyota Gazoo Racing World Rally Team WRT, sat the drivers Jari-Matti Latvala and Mikka Anttila (No. 7), Ott Tänak and Martin Järveoja (No. 8) as well as Esapekka Lappi and Janne Ferm (No. 9). The set with a limitation of 750 pieces in format 1:43 and produced by the top-label Spark will arrive at the collectors in a high quality packaging. But first, we want to come to the season 2020.

After about a six month break, the WRC will continue next weekend. The Toyota Gazoo Racing World Rally Team wants to continue at the Rally Estonia, which takes place from September 4th to 6th, 2020, where it left off in mid-March in Mexico. Currently, the team leads the manufacturer ranking with 21 points ahead. It looks the same in the driver standings: Sébastian Ogier is in front, Elfyn Evans follows on the second place and Kalle Rovanperä on the fourth position. All three drivers celebrated a sensational debut in the Toyota WRC at the beginning of this year. Evans won in Sweden, Ogier in Mexico, before the season was interrupted due to the global Covid-19 pandemic. The set with the three Toyota Yaris from 2018 with item number TOY14143SC, available at a third of the original price, is the ideal companion.

The rally in Estonia is a new station in the revised calendar for 2020. Strict rules for the care of all participants enable a safe and responsible restart of the season. Estonia is part of the WRC for the first time; however, all manufacturer teams already sent cars to a promo-race in the previous year. The rally leads over fast and smooth gravel roads with many crests and jumps. Since the restrictions has been relaxed, the team prepared itself with tests in Finland and Estonia for the restart; this also included the participation of the rally southern Estonia, last weekend. According to the press release issued by Toyota yesterday, the event will take place on a shortened route, most of the tests with a total length of 233 kilometers will be held on Saturday and Sunday.

The base is in Tartu, the second largest city of the country, where a short opening test will take place on Friday evening near the service park at the Raadi airfield. There are going to be ten tests on Saturday - five in the morning and five after the service-break at noon. On Sunday, three tests will follow, which are going to be driven each twice without an interim service. "It's great to finally drive again", says team boss Tommi Mäkinen. "It especially pleases us for our fans and for our partners, who have been waiting so long for this moment. We hope to make the people happy in difficult times. The beginning of the season seems like a long time ago, but it went positive for us, and we hope to continue there!" Mäkinen says that the fast streets in Estonia come towards the car.

Accommodating in the price, this is also the point with further modelcars to Toyota Gazoo Racing. One example is the Toyota Yaris WRC of the drivers Ott Tänak and Martin Järveoja from the season 2018. The winner of the rally Argentina appeared under item number TOY13143A and is also limited to 500 units in scale 1:43. As with the other models made from the high-quality resin for the Finland, Germany and Turkey rallies, Spark has perfectly matched the lines of the prototype and implemented the elaborate printing first-class. The original collector's models for all Toyota collectors and fans are individually numbered and decorated with printed autographs of the two drivers on the showcase hood. As already mentioned: They are strong companions for the restart of the WRC-season. We wish success, Toyota Gazoo Racing!

Here: Click to the modelcars of Toyota at a top price