The SUV-coupe is a hatchback offshoot of the well-known SUV from 2018. iScale brings the corresponding modelcars of diecast 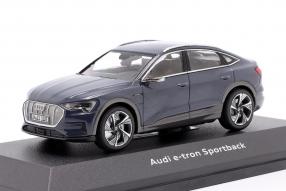 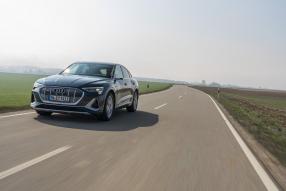 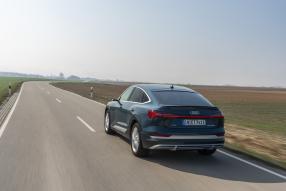 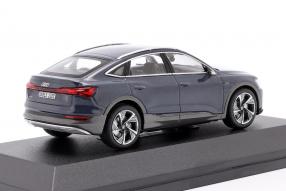 iScale presents the modelcars to the brand new Audi e-tron Sportback, which was presented at the Los Angeles Autoshow last November, in its exclusiv painting plasma blue. The miniatures of the five-door vehicle from model year 2020 come under the item number 5012020032 from diecast and in scale 1:43 to the collector; packed in the factory packaging of the car manufacturer from Ingolstadt. As to be expected in no other way, the proportions and the appearance of the Sportback, built in Brussels, match perfectly; iScale is known and popular for its exact transfer of the prototypes into the model. Doors and hoods remain closed in this size as usual. But that does not mean that iScale has not meticulously dedicated itself to every detail in teh interior: Thus an indispensable model for Audi-collectors.

So let's take a look at the role model: The Audi e-tron Sportback corresponds almost entirely to the hatchback-SUV with its dimensions and measures 4.901 meters in length, 1.935 in width and 1.616 meters in height. Its roof stretches flat over the muscularly styled body, falls - as is typical for a coupe - towards the rear and ends in strongly inclined D-pillars. The lower edge of the third side window rises to the rear - a typical sportback feature that iScale has taken into account in its work. But that starts with the downsizing of the octagonal single frame with its vertical struts in light platinum gray, which the mold makers reproduce just as correctly as they have reduced the pronounced contours above the wheels and the plastically shaped rear. Thus, role models as well as miniatures fit into the design language of the brand.

Let's look under the sheet: The Audi e-tron Sportback 55 quattro - so the official sales description - is equipped with an asynchronous electric motor on each axis, which is powered by three-phase power electronics. With a power of 265 kW (corresponds approximately to 360 hp) and 561 Newton meters (Nm) of maximum torque, the two E-motors accelerate the SUV-coupe in 6.6 seconds from 0 to 100 kilometers per hour; the advance is limited at 200 kilometers per hour. If the driver changes the speed level D to S and pushes the pedal to the max, he activates the Boost-mode. There, the drive produces 300 kW / 407 hp and 664 Nm torque for eight seconds. Then, the sprint from 0 to 100 takes 5.7 seconds. A proper highlight package, which you can now park in the showcase.

Here: Click to the modelcars of the Audi e-tron Sportback 2020