Modelcars, limited to 999 units in scale 1:18 by GT-Spirit remind on the tuning company from Munich 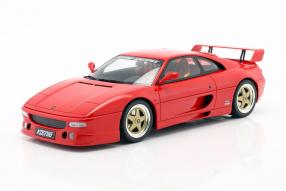 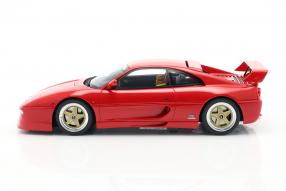 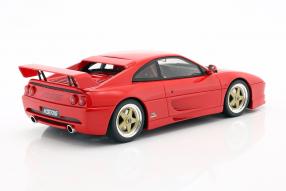 Miniatures as the Ferrari 355 from tuner Koenig Specials, that is the domain of GT-Spirit and Ottomobile: The production of modelcars after their role models, which have a quantity that is not as high as a Porsch 911 in 1:43 for example, can usually only be economically represented if they are made from resin plastic. And from exactly this high quality polyurethan cast resin, modelcars to the Ferrari mentioned at the beginning reach us in the color corsa red, which GT-Spirit brought to the market in an edition of just 999 units last week. The miniatures, available under the item number GT263, differ in the detail of teh base vehicle that the tuning company in Munich came up with in 1995 for this car.

The line management of the Koenig Specials Ferrari F355 still looks as fresh as like 25 years ago. The upgraded front bumper, compared to the basic version, still fits in time with its curves, as does the simple design of the flanks of the two-seater, which was first introduced in March 1994 and is free of unnecessary beads. And in terms of performance, an F355 from Koenig Specials can still compete with today's super sports cars. Compared to the original version with its 280 kW / 381 from the V8 with its 3.5 liter displacement, the data sheets for the revised engine of the Koenig Special F355 show 447 kW / 600 PS. In 3.9 seconds instead of 4.7 in the production version, this tuned vehicle accelerates to 100 km / h. Base version as well as tuning version have a six-speed manual transmission on board.

In addition to the golden lettering by Koenig Specials on the top of the windshield, the big rear spoiler does also point out the modification that come from the refiner's house, highly valued by Ferrari fans. It was founded in 1977 by racing driver Willy Koenig and achieved world fame with his modifications of the Ferrari 348, F40 and Testarossa: The attention of international automobile magazines contributed to the popularity of the modifications, which were appreciated by actor Sylvester Stallone and racing driver Gerhard Berger. Less from Ferrari: The logos of the sports car manufacturer had to be removed at the modifications. As you would expect, GT-Spirit also implemented these details and the appearance of the timeless design exactly into the model. A truly furious start into the new week! All the best for that!