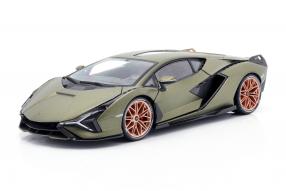 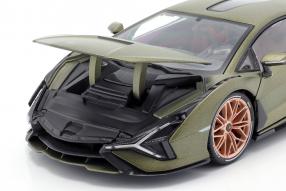 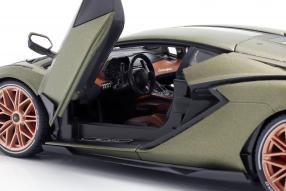 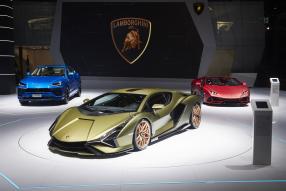 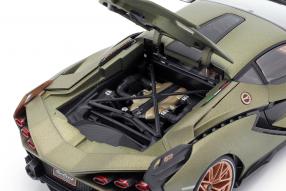 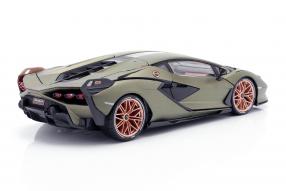 The people from the Italian Bologna call a flash with the name Sián in their dialect, which they also use when it's about cars. And therefore Lamborghini made the right choice when it came to the discussion on which name the first V12 with hybrid drive set should be baptized. The Lamborghini Sián FKP 37 from the model year 2020 is now also role model from the modelcars painted in matt oliv paint by Bburago, which are produced from diecast and come to the collector iin scale 1:18. The miniatures are available under the item number 18-11046 and offer the fans a lot of functions: steerable front wheels are on board as well as openable doors, the foldable front hood over the trunk as well as the functionable engine hood. Let us take a closer look at the modelcars and its role model.

The Sián has been presented for the first time to the public at the 68th International Automobil-Exhibition 2019 in Frankfurt am Main, probably the last one at this point. In addition to the flash, his name needs a little explanation: With the addition FKP 37 after the name, Lamborghini wants to remind Ferdinand Karl Piëch, who died on August 25th, 2019, who was Chairman of the Board of Management of the Volkswagen AG between 1993 and 2002 and then Chairman of the Supervisory Board until 2015. Thus, his initials and year of birth can be found on the super sports car. On the other hand, the number of pieces in which the Sián is built is based on the year in which Lamborghini was founded: 63 units will leave the factory; The company was founded in 1963 by the tractor manufacturer Ferruccio Lamborghini. In 1988 it became part of the Volkswagen group and bought by Audi.

The Lamborghini Sián FKP 37 does not only draw attention to its striking lines in the style of the house - which Bburago transferred perfectly including all beads and edges into the scale 1:18 - but also to its hybrid drive set. This exists of a twelve-cylinder with 6.5 liter displacement from the Lamborghini Aventador as well as the electric motor built into the transmission. The V12 developes 577 kW / 785 hp; the electric motor delivers 25 kW / 34 hp? Yes, as strong as once the Volkswagen Beetle with which entire families went on vacation across the Alps to Italy. But back to the Sián FKP 37: Its system output is therefore 602 kW / 819 hp. The maximum torque of the V12 is given with 720 Newton meters (Nm), that of the electric motor 38 Nm. Thanks to its all-wheel drive, the vehicle is thus faster than 350 kilometers per hour.

The Sián FKP 37 accelerates from 0 to 100 in less than 2.8 seconds. Its electrical energy is not stored in batteries, but in a supercapacitor. But what is it? We quote: "Compared to accumulators of the same weight, supercapacitors only have about 10 percent of their energy density, but their power density is about 10 to 100 times as large. Supercapacitors can therefore be charged and discharged much faster. They also survive a lot more switching cycles than rechargeable batteries and are therefore suitable as a replacement or supplement if a high switching load is required." Sounds like that is a good thing for smartphones and laptops, too. In any case, the modelcars of the Sián are very good, which in our view should not be missing in any collection of super sports cars.

Here: Click to the modelcars of the Lamborghini Sián FKP 37