With two versions of the precursor of the Panamera in scale 1:43, the crew from Zuffenhausen reminds on a sport car that originally should replace the version of the 911 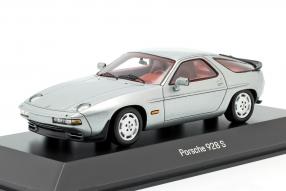 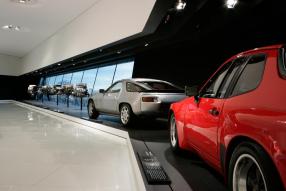 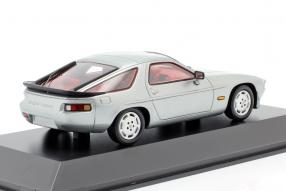 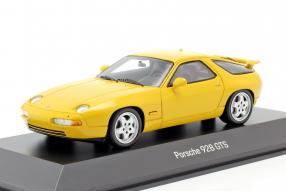 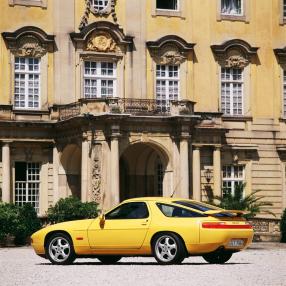 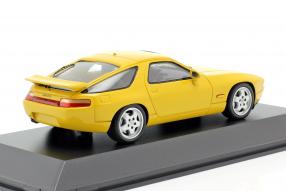 The Porschd 928 is not for the first time in our blog. On the occasion of the entrance of two modelcars with the item number of the Porsche-Accessories-program, we turn to the second and last version of the great Gran Turismo today. Spark has transferred the Porsche 928 S from 1980 into the scale 1:43, which is listed under the number MAP02005317 and replicates the early top version in metallic silver that followed on the original vehicle from 1977. Silver is an equally classic color in the house of Porsche than the Speed Yellow, in which Spark parks the 928 GTS under MAP02005217 from 1977 in the showcases of the collectors: The last edition of the coupe was produced from 1992 to 1995. It still sounds in the ears that there had been criticism of how sucked it was, but by that the 928 GTS appears more contemporary than its predecessors from today's perspective.

The Porsche 928 S was released in the model year 1980 and was built next to the 928, which was significantly weaker with its 176 kW / 240 hp than the 221 kW / 300 hp offering 928 S. The V8 also differed in the displacement: 4.5 liters it in the 928, around 4.7 liters in the Porsche 928 S. By increasing the compression, the stronger Porsche had to be filled with super petrol instead of regular petrol. The maximum torque jumped from 350 Newton meters (Nm) to 385 Nm. In terms of top speed, the 928 S also clearly outperformed the 928 at 250 kilometers per hour over the 230. The 928 S was set to 100 in 6.6 instead of 6.8 seconds. It was shifted with a five-speed manual transmission or three-speed automatic. The version from 1980 was to remain in the program up to and including model year 1983 before the engine was revised and the performance increased.

The identifying features of the 928 S compared with the 928 is worked out well by Spark: The newly designed alloy wheels and the small front and rear spoilers immediately catch the eye. Beyond that Spark sparkled the lines of the big GT very well and implemented them in the model. A praise that naturally also applies to the Porsche 928 GTS, which, as mentioned at the beginning, appeals to the collectors in Speed Yellow. It shows the length of time in which the series was manufactured: from 1977 to 1995, 18 years; something that is hardly done today. The first generation of the perceived successor Porsche Panamera had seven years before the all-new Panamera came; the 928 were model-maintained and always built on the same basis, even if facelifts changed their look. Which leads us to the modelcar of the last 928, the 928 GTS.

The 928 GTS was presented for the model year 1992 and replaced the S4 and the GT at the same time. The displacement had meanwhile grown to around 5.4 liters, of which it developed 257 kW / 350 hp as well as 500 Nm. With 275 kilometers per hour and an acceleration of 5.7 seconds with the five-speed manual transmission and 5.9 with the four-speed automatic, it again raised the bar. Chassis and brake system have been revised and further improved, which remains invisible in the model. But visible are the widened rear and the continuous light strip, the rear wing painted in body color, the exterior mirrors in a new shape and the 17-inch alloy wheels in the so-called cup design. Our conclusion: belongs in every collection!