The exact assignment of the role models of new modelcars in scale 1:18 requires a precise inspection of the statistics: an excursion into the world of the famous US coupe 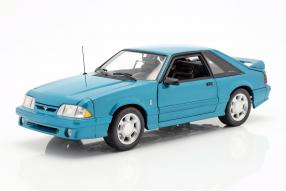 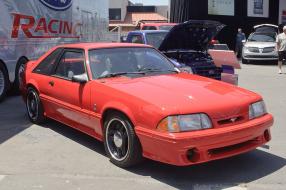 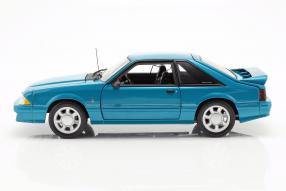 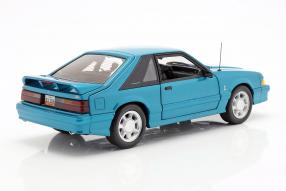 GMP has delivered new miniatures to the Ford Mustang in these days. The American coupe continues to enjoy great popularity, was and is considered as an inexpensive alternative to the Porsche Cayman or even 911, for example. The newest vehicle with the name Mustang howevery is no sports car, but a Mustang Mach E as first full electric SUV from the house of Ford. But in order to land on the role model of our current model in the blog, we have to go back a few years: GMP has presented three modelcars of the Ford Mustang Cobra from 1993 in scale 1:18 built of diecast, which spoil the fans with all-round opening doors and hoods and are strictly limited in their three colors. The models have steerable front wheels and a handcrafted interior. Let's take a closer look at them!

The Ford Mustang Cobra of the year of construction 1993 appears 750 times in black paint under the item number 18921, in red color under 18922 limited to 798 units and 762 times in an extraordinarily interesting blue-green under 18923. But what kind of vehicle was it actually that GMP  replicated with these modelcars so meticulously? And here it gets a bit complicated: The Ford Mustang made its debut in 1964 and gradually appeared in revised versions; there were a total of four up to and including 1973. Then the naming begins, which starts with the Ford Mustang II, which was created on a new basis. The model for our miniatures presented here is not the Mustang III, which went into production in 1979, but the variant that was already face-lifted again. The so-called sixth generation car was given a final makeover with the 1992 model year.

But only for the end of the series, 1993, Ford presented the Mustang Cobra, an exclusive model limited to 5000 units, which was powered by a 5,0 liter V8 with 171 kW / 233 hp and a five-gear transmission, a special rear spoiler, which reduces the end point of the series: This generation Mustang came to a stop in the summer of 1993. The deep-treaded front is replicated very well and has a gap that separates the front apron from the front end. At that time, small gaps were not an issue. The gas lift of the tailgate catch the eye; the eight-cylinder is just replicated extraordinarily well. Well done, GMP, and a good drive with it into the new year to all Ford fans!

Here: Click to the modelcars of the Ford Mustang