Whoever wants to create a collection of the Ford GT, should hurry up, because Ford is showing the first shots of the tests of the successor. 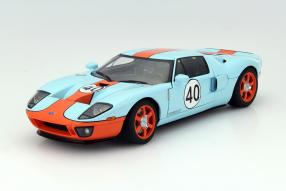 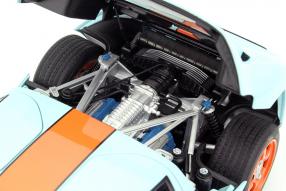 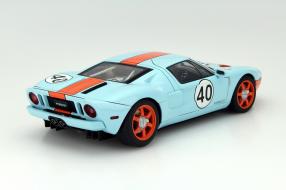 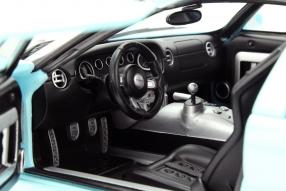 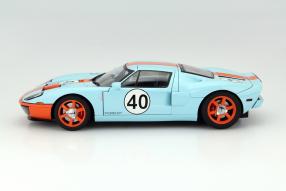 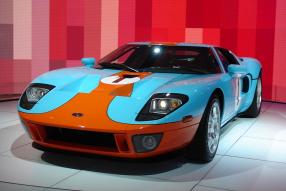 No, not 40 inches, but 43 inches in hight is the production version of the Ford GT, which presented the carmaker in the period between April 2004 and September 2006 the wheels: this was the reason why the new edition of the designs of the legendary Le Mans Racing cars of the years from 1964 to 1968 which was 40 removed from the name. The attractiveness of the draft did not diminish: First introduced in 2002 as a study by the Ford GT went into production and was built 4,038 times.

He received a 5.4 liter V8 offered mid-engine, the 404 kW / 550 hp at 6,500 rpm gave. About 600 PS aims to provide its successor, which could be seen as a study already and already eagerly turns the prototype his rounds. Ford can participate in it, the fans via video. We are pleased at first but over a great model car that AutoArt presents us in legendary colors.

The label is AutoArt quality collectors model cars for many years, a name and represents quality and solidity. Unforgettable in this context the model of the then CL-called S-class Coupé from Mercedes-Benz with the internal series designation C 216, which appeared of 2006. Then as now, with the Ford GT AutoArt delivers an excellent job, because both in the discipline of processing as well as in the discipline of the impression the model runs on the top of the podium.

For use in motorsport the Ford GT was not provided, so Ford yet but should be able to compete with the best sports cars. This succeeds the model also. A look at the body proves how exactly engineers AutoArt have worked: The appeal coincides perfectly with the role model; the finish is made from artisan view top notch.

Many functional parts on model

All doors and hoods of car model made of diecast zinc can be opened. So can gain a great insight into the technology of the super sports car of the owner, because the modeler has every detail looked exactly. Of course, we most impressed the look under the hood that pops up backwards: The two painted in blue cylinder heads, the spark plug cap, the cabling and the design of chassis technology and suspension recognize blank how expertly it has proceeded to the model in implementing at AutoArt ,

Inside, it is just as detailed further: The appearance of the instrument panel, center console and seats fit - given no cause for criticism. The coloring of the round instruments, the look of the shift lever and bucket seats and that of the pedals are evidence of much expertise in AutoArt.

Although they considered to look like double doors from the outside - there are none. The doors are hinged like the prototype of the A-pillar. The design had already been applied in the GT40, so that the driver does not push their heads in Le Mans when boarding. As the hoods they close the model perfectly. When followers are to be installed upward-opening doors. Whether he will be successful at Le Mans?

We do not know yet. Probably, however, that we will see him as our model car in the colors of Gulf Oil: the globally operating oil company was founded in 1901 by its striking light blue-orange paint known who carried the financial support of his race car on display; always be seen on sports cars, which do not receive funds from the 1984 Chevron merged labels.

What became of Gulf Oil?

The brand name exists until today: In the US, it is utilized by the Gulf Oil LP; outside the United States are the rights in the hands of Gulf Oil International (GOI) and the Indian Hinduja Group. Since the 1990s, were particularly opens up many new stations again outside the United States: 1997 in the Netherlands, in 1999 in Luxembourg. In Germany Gulf is in the region south of Magdeburg to Bayreuth or in the region between Kassel up to the border of Poland actively.

Finally, we want to provide you with a few key detailes about the Ford GT in 2004, came from the only 101 pieces to Europe and had to have his time for 177,000 Euros: The V8 develops a maximum torque of 774 Newton meters (Nm) at 4,500 rpm and GT accelerates in 3.9 seconds from 0 to 100 kilometers per hour. Top speed 330 kilometers per hour. Something that the successor is determined beat.