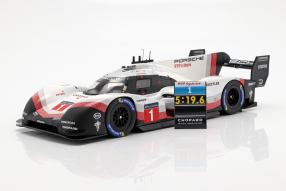 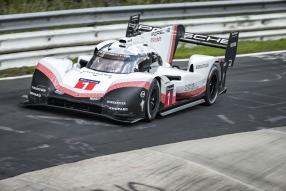 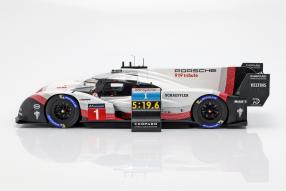 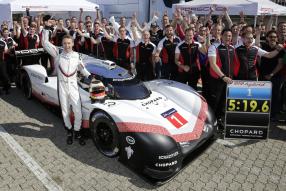 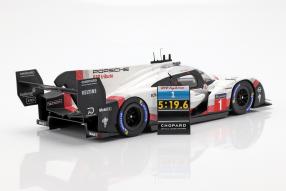 The Porsche 919 Tribute from 2018 already appeared as a modelcar in scale 1:43, but now Spark brings the retail trade version in format 1:18. Under the item number 18S405, a high quality miniature of polyurethane casting resine is from now on available, which replicates the record car of the two-times endurance world champion and Le-Mans-overall winner Timo Bernhard, who drove it. Spark has perfectly adapted the appearance of the role model specially prepared for the record use into the so-called Bburago size and added to the model the reduction of a timetable, which shows the lap time finally displayed on the stopwatches, with which the record of over 35 years by Stefan Bellof has been beaten: Timo Bernhard circled the Nordschleife in 5:19,55 minutes.

But back to the beginning: Porsche Motorsport wanted to test, how a car without any restrictions of the regulations of released sports car prototypes will turn out. The Evo-version of the Porsche 919 Hybrid is based on the Le-Mans-overall winning car and WEC-Endurance-World-Champion of the years 2015, 2016, 2017. Its hybrid drive developes a system performance of 853 kW / 1.160 hp. The Evo only weights 849 kilograms, because lighting system and car lift, air conditioning and windscreen wipers were waived. The wheel carrier and the power steering were reinforced because of the expected higher speed. The modified, active aerodynamics with bigger front diffusor, wider rear wing and a DRS-system, 53 percent more downforce was generated compared to the WEC-model.

And that has certainly made an impact: on April 9th, 2018, Porsche set the unofficial lap record of 1:41.770 minutes with the 919 Tribute at the Circuit de Spa-Francorchamps, where it was faster than the Formula One. Timo Bernhard, however, wrote in the morning of June 29th, 2018, motorsport history: He circled the 20.832-kilometer Nürburgring Nordschleife as mentioned above in 5:19.55 minutes. Thus, the five-time overall winner of the Nürburgring 24-Hour race and team owner from Bruchmühlbach-Miesau achieved an average speed of 233.8 kilometers per hour. And so raced the Nordschleife faster than Stefan Bellof succeeded in 1983. Bernhard - avowed Bellof fan - undercut the previous track record of the unforgotten man from Giessen by 51.58 seconds.

35 years and 31 days Bellof's record lap of 6:11,13 minutes remained unchallenged, which he drove on May, 28th, 1983, with a 456 kW / 620 hp Rothmans Porsche 956 C in the final training for the 1000-kilometer race. His average speed was 202 kilometers per hour. Timo Bernhard climbed after reaching the record on the same route as once Bellof proud and relieved from the narrow cockpit of the Le Mans prototype. "This is a great moment for me and for the whole team - the culmination of the 919 program - the Evo was perfectly prepared and I gave it all on this lap", said the professional racer and team owner happy. And that's exactly what the modelcar reminds to. It plays on the same level of quality as the one that set the team of Porsche and Timo Bernhard as well as the 919 Tribute a worthy monument.