The small series label inspires with three novelties the fans of top-class sports cars. We&#039;ll take a closer look at the open Briton among them 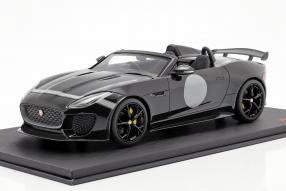 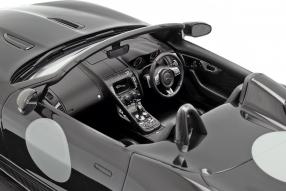 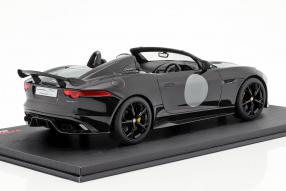 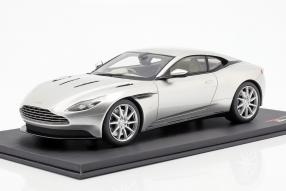 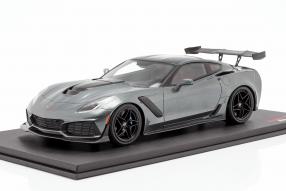 The crew from True Scale has put an especially cool modelcar on the wheels under the item number TS0168, which replicates the limited to 250 units Jaguar F-Type Froject 7 from 2015. The F-Type was then subjected to a radical cure: A flattened by about eleven centimeters roof or a correspondingly lower roof line of equipped with an emergency canopy instead of an electrically powered hood roadster, a reduction in weight by 85 kilos, an increase in power by 18 kW / 25 hp to now 422 kW / 575 hp and thus offers a fight announcement to top versions from Porsche or Mercedes-AMG. The matching modelcars in format 1:18 are limited to 999 pieces, so in the company of an Aston Martin DB11 and a Corvette.

But first to the most spectacular of the three new releases, the Jaguar F-Type Project 7: The role model of our model has been the result of a treatment by the Department Special Vehicles Operation, which led the basis of the Jaguar F-Type R Cabriolet stylistically closer to the D-Type. Its window frame has been shortened by 114 millimeters and behind the driver's seat flows a wide scoop over the rear, which TrueScale has shown excellent. The vehicle was also redesigned under the tin: a stiffer steering column, harder springs and more negative camber on the front axle optimally optimize the driving characteristics of the sports car - which, of course, can not be seen on the model. The Project 7 also completed a lap on the Nürburgring Nordschleife in 7:35 minutes thanks to its sport mode in traction control.

The car is powered by a compressor assisted V8 with a maximum of 700 Nm of torque. The number 7 in the designation should remind on the seven victories, which Jaguar has achieved at the 24 Hours of Le Mans with its D-Type. 20 units of the Project 7 were reserved for Germany; 155.000,00 Euro were called for the car. Today the vehicles cost from 162,000.00 Euro in Stuttgart to 225,000.00 Euro in the Belgian Zolder; five are currently posted on mobile.de. The price of a model from TrueScale is then cheaper. By the way, with the modelcars of the Aston Martin DB11 2017 and the Chevrolet Corvette ZR-1 2018, TrueScale has released two more impressive models (TS0126, TS0148), which are also made of high-quality resine plastic and perfectly reproduce the appearance of their prototypes in equal numbers.