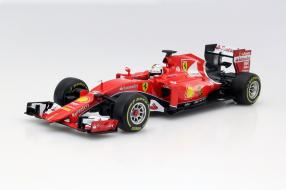 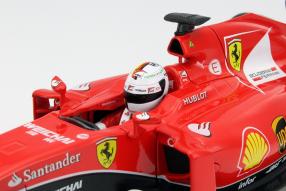 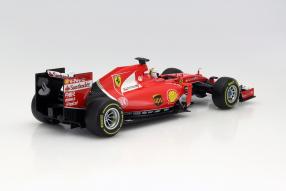 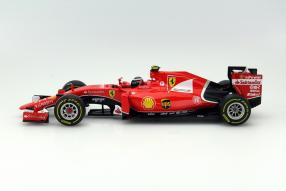 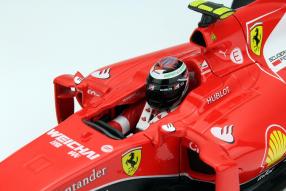 Nico Rosberg secured  the pole position for the Japanese Grand Prix with a best time of 1: 32.584 minutes. Before Sebastian Vettel, whose patrol car Ferrari SF15-T Bburago provides the right model car 1:18 scale. This is now on sale and can make a critical assessment. Already at first sight it is clear that the Ferrari suceeded pefertly in the style of Bburago.

A Ferrari from Bburago - this is something special, because the Italians have made the 1:18 scale real popular with the model of the Ferrari F40 1987. In Finish the Ferrari SF15-T is comparable with miniatures from other manufacturers in every way: the proportions of the shares subscribed by designer James Allison racecar have taken the form of civil engineers perfect. The outer skin is harmonious to the last detail.

A look at the details

Looking at the front: The connection of the upper strut is attached to the highest point on the chassis, where an inboard pivot is. The lower wishbone is mounted very low on the chassis and the two there converging suspension arms are so close together that they overlap each other and form a single aerodynamic profile. More difficult to make, but aerodynamic advantages bidding, so the designer.

A good balance for the Prototype

Bburago has also implemented well The shape of the underbody, especially the front part in the scale of 1:18. No doubt, then, that the unity of transmission and engine referred to internally as Ferrari 059/4 - a critical eye may consist. Praise also for the reproduction of the cockpit of the 48th race car, the Scuderia is launched in the Formula 1 World Championship. Premiered this the way on January 30, 2015 Maranello.

The Prototype vehicle weighs 702 kg and is modeled after the previous course of the first year show the driver duo Sebastian Vettel and Kimi Raikkonen, making it  a not so poor result. The state of the last race of 20 September 2015 - the Grand Prix of Singapore - has retracted the SR15-T total of 310 championship points, 11 podiums, 1 pole position, 186 laps and 3 wins.

Loooking back at the serious superiority of the cars of Lewis Hamilton and Nico Rosberg which are not bad at all: The upward trend in the red racers from Maranello is unmistakable. So it seems perhaps not a bad decision from Vettel to have been succumed by the myth Ferrari after the 4 World Championship titles with Red Bull Renault.

Frankly I am glad also that the traditional label Bburago celebrates resurrection and was able to secure the license for the production of such an important car model. Although Ferrari behind Mercedes AMG Petronas F1 is 310 compared with 463 championship points only on the 2nd place of the current constructors' championship to Bburago has secured with the finish of the SF15-T a top spot on the podium of the hearts of the fans. Incidentally, with the now also deliverable car of Vettel's team-mate Kimi Raikkonen. Finally, dear fans, wishes ck-model cars you a nice weekend and a lot of fun at the Grand Prix of Japan.