The modelcars of die cast to the Japanese sports coupe from 1978 in scale 1:18 are reminiscent of a rival, the Porsche 924 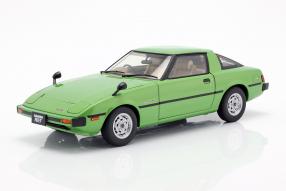 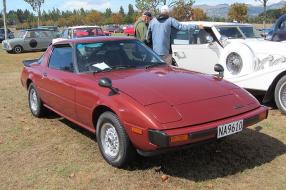 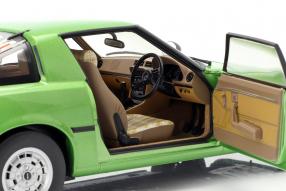 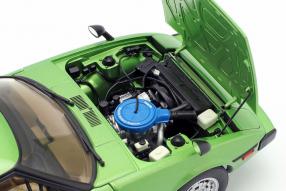 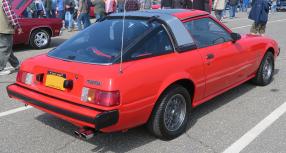 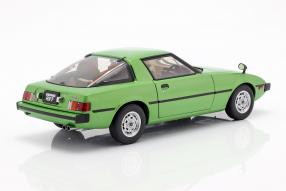 The models from Autoart belong to the top products of the business: Almost exclusively equipped with openable doors and hoods that gives deep detail at a quality, which is above the modelcars of many other brands. The craftsmanship-quality for example at the gap dimensions of the functional parts would lead the former responsible people at Volkswagen to cheers - who have raised the reduced width of door cracks as a quality feature. The miniatures of the Mazda RX-7 from the model year 1978, to which under the item numbers 75981, 75982 and 75983 models have come in green, white and yellow in our webshop and the Mazda is available for a very cheap price. The Throwback Thursday is reason to focus on the RX-7.

Fans of the social media services know that the hashtag #throwbackthursday usually looks back on pleasant things or events. The models to the Mazda RX-7 are like the role models undoubtedly very pleasant: the miniatures because of their characteristics and the coupe itself because of the sympathetic charisma, which makes this small sports car seem attractive even today. The role model celebrated its premiere in 1977; The RX-7 was produced in four generations from 1978 to 2002. According to information around 811,000 vehicles of this series were created world wide. The prototype for our design is the original RX-7, which has the internal name SA / SA2 / SA22C and which attracted attention with its hip, trendy headlamps and the Wankel engine under the hood.

Wankel engine? Right! There was something! This drive set was built under the license of the German car brand NSU and especially known by the NSU Ro80, which was produced from 1969 to 1977. The limousine was ahead of its time in design, but greater success was hampered by problems with the rotary piston engine's sealing strips and numerous other engine difficulties. Mazda had already decided at the time of the launch of the RX-7 for the Wankel in other model series, but in the four generations of the sports coupe it should come for use until the production stop. At the beginning of his career, the RX-7 made 1.2 liters of chamber volume 77 kW / 105 hp. At 4,000 revolutions per minute, 167 Newton meters (Nm) of maximum torque were applied; passed on to the rear-wheel drive.

Shifted by four-speed or five-speed manual or three-speed automatic transmission. Only nine or 11 seconds in the automatic version passed, until the built in 1981, the first RX-7 reached the 100 km / h. The top speed was just under 200. Main competitor for the series was the Porsche 924, which was not only very similar because of the folding headlights, but overall too, the RX-7 however undercut significantly price-wise: In the US, the Mazda was almost $ 5,000 cheaper. Favorable are now also the modelcars of the RX-7, to whose highlights like with Autoart - own way of writing AUTOart - usually counts the replica of the engine; with all wires and in four colors. The folding headlights work, the appearance of the lines is in perfect harmony with the models. The models of the RX-7: Throwback Thursday in its most beautiful form.

Here: Click to the modelcars of the Mazda RX-7