For the produced models in scale 1:18 and in the known high-class finish out of diecast and original materials, the label deserves standing ovations 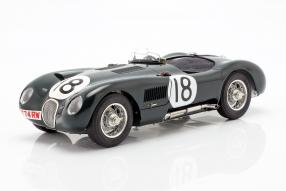 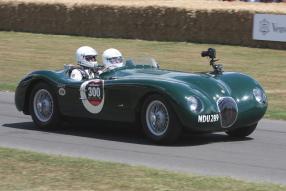 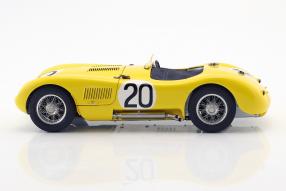 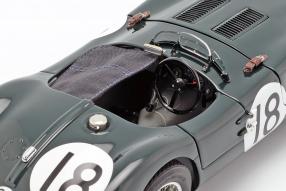 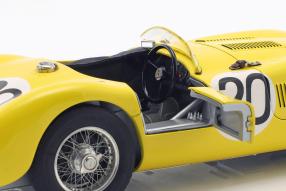 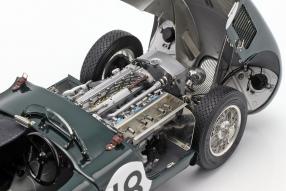 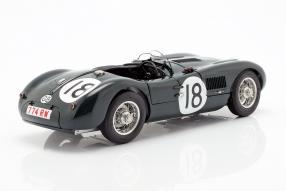 Position one, two, four and nine - This result at the 24 Hours of Le Mans in 1953 was basically due to the previous year, in which Jaguar completely failed: In 1951, the Jaguar Type C had won sovereign; one year later, the mission at the Sarthe went completely wrong. A shame, which should not be repeated for the sake of the British so that Jaguar Cars Ltd. sent four well prepared C-Types to Le Mans, in relation to reliability and handling. Chief-Engineer Bill Heynes optimized the aerodynamics with the intention for a high top speed. The tubular steel frame chassis was redeveloped and received a body of thin-walled aluminum with just one door, designed by the aircraft-building engineer Malcolm Sayer: the basis for the drivers Tony Rolt and Duncan Hamilton.

The fact that these two gentlemen in the narrow cockpit even had to carry spare spark plugs and tools, was based on the absolute will to bring home this success, which was so important for the marketing of the brand. Only because of that, the four vehicles had been built up completely new, the engines were revised and equipped with three double carburetors from Weber. Sayer brought a rubber tank from the aircraft industry; Dunlop donated for the first time disc brakers and a break booster. For improved roadholding in Le Mans, the rear axle got an additional support and the front axle got a stronger anti-roll bar. The work was worthwhile: after 304 laps of 13.492 kilometers, Rolt / Hamilton crossed the finish line of this race, which ran as the 3rd race of the Sports Car World Championship, where a total of 60 vehicles have competed.

The weather conditions were warm and dry, but nevertheless, only 23 cars from the nine racing classes came in the evaluation. The winner team with starting number 18 raced 4088.064 kilomters, before Jaguar was allowed to squirt the champagne. On average, they had raced 170.336 kilometers per hour. So it's a truly heroic role model that the experts from CMC have adopted with the M-195 modelcars. As usual with this high-end label, the quality is of the very highest quality; the team from Fellbach around managing director Shuxiao Jia has not only met the appearance of the body or the prototype exactly, but also set new standards in the details of modelcar constructions.

So a total of 1150 parts grew together by hand assembly to the model of the scale 1:18. Under the hinged and lockable engine cover, the collector expects a faithful replica of the 3.4-liter six-cylinder in-line engine with all attachments and complete line laying and wiring. This includes a detailed replica of the cooling system and corresponding oil and fuel lines. The exhaust pipes are made out of metal. The wishbone front axle with oil pressure shock absorbers, the longitudinal torsion bar suspension and the rigid rear axle with trailing arms and oil pressure shock absorbers were also made out of metal. The grille is handmade and made of stainless steel. Leather is on the seats; the driver's door has authentically simulated hinges to open.

The fact that the spoke wheels with hand-pulled and nippled stainless steel wire spokes and screw-on central locks with authentic right / left-hand thread shine, the front wheels are steerable and the fuel cap movable, does not surprise anyone who knows the modelcars from CMC: the Jaguar C-Type, limited to 1,500 pieces, out of diecast has once again exceeded the label itself. So it's nice that this modelcar is also available with the starting number 20, with which the driver duo Roger Laurent and Charles de Tornaco occupied the ninth place of the 24 Hours of Le Mans in 1953. The miniature corresponds finish-wise to the exactly described model with the No. 18 and can be reached via the link embedded below.