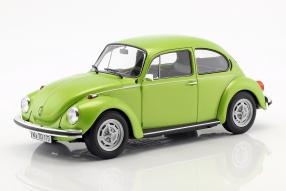 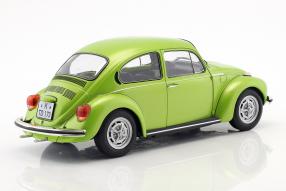 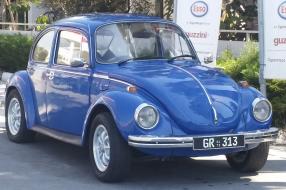 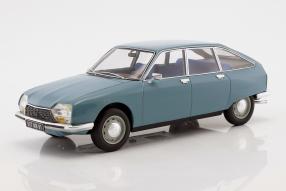 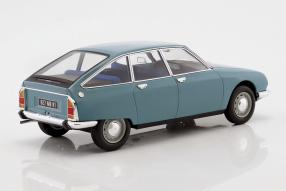 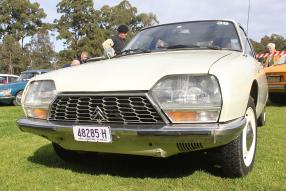 The net community uses the hashtag #throwbackthursday, to reminisce on the Internet of beautiful and pleasant memories associated events. Positive emotions are brought to life, when we think back to the role models of the both modelcars from Norev, which we want to present today: The Cirtroen GS Club and the VW Beetle 1303 in scale 1:18. Both miniatures had been produced after the role models out of diecast from the french people from Vaulx-en Vaulin, not far from Lyon, and have received steerable frontwheels on the way to the collection showcases. At that time, the cars had been real crowd pleasers. Taking this circumstance into account, Norev has taken care of the details very carefully and  put wonderful modelcars on the wheels, which a relic from the past brings a lot of shine: chrome!

The Volkswagen VW 1303 Beetle came on the market in August 1972 and was built in this form up to including the model year 1975. In the original version it wore the front turn signals, according of the beetle tradition, on the fenders; matching to the new VW Golf I they were displaced into the bumpers in the end. The fact that the 1303 actually existed was owed to the USA: a regulation was in the planning there that stipulated that the passengers should sit in front of the windshield at a minimum distance of the forward bent body. Since the previously distributed beetles did not comply with this directive, the Type 1 was rebuilt, although the 1302 was only produced since 1970: VW invented the strongly curved windshield, which led to a shorter bonnet. Ultimately, a futile effort of love, because the strict directive was not so then.

The new model can be seen not only on the far forward curved windshield, but also on the first introduced large three-chamber tail lights, which were popularly called elephant feet. The new instrument panel staged the central instrument in a whole new way. Norev has converted these details very well into the model and donated the small big beetle the tons of chrome, the model had to offer: bumpers, trim on the belt line and the sill and around the windows offer much for the eye and were of the French like the door handles, headlight rings, exterior mirror housings and windscreen wipers perfectly implemented. No question that the appearance and proportions are exactly the same as the design of the role model.

The engine offered with 1.2 liters, 1.3 and 1.6 liters of capcity three variants of the four-cylinder boxer with 25 kW / 34 hp, 44 kW / 32 hp and 37 kW / 50 hp in the VW 1303 S. The three-speed Semiautomatic was optionally reserved for the more powerful versions. It is a really fantastic modelcar offered to us by Norev under item no. 188523 and in contemporary green metallic, which we once again saw at the  Golf I as vipergreen metallic and was called ravenna or sambesi green. Among other things in camarque blue however a car was on the market at the time of the VW 1303, coming from the French beetle conceptually far superior: the Citroën GS, the "Grande Série", which should mean in English "large model" and to which Norev has presented also a great modelcar in 1:18 under the item number 181625.

The concept of the four-cylinder boxer engine with air cooling in the Citroën GS was even a common feature with the VW, but this sat under the front hood and drove the front wheels. The fact that the GS with its hydropneumatic chassis and four doors was two classes higher than the Beetle, makes these cars really incomparable, as well as they would do as a modelcar side by side in the showcase. But engine-wise they had been not far apart: The GS offered from 40 kW / 54 hp from 1.01 liters of capacity over 43 kW / 58 hp to 46 kW / 63 hp from 1.2 liters only marginally more power. In curb weight, both cars were about the same at around 860 to 890 kilos. Two concepts that could not possibly be more different, to which Norev reminds us today in the usual quality fashioned way.