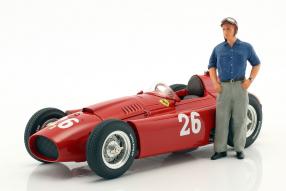 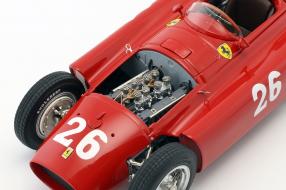 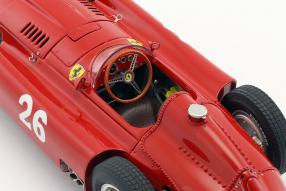 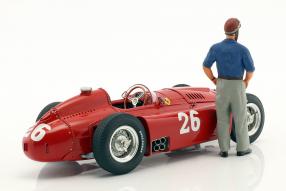 Peter Collins and Juan-Manuel Fangio - two race drivers, who are not only connected forever, because they drove for Ferrari. No, it is a legend, which was never founded again in motorsport. Let's look back: The Formula 1 world championship of the year 1956, was known at this time as the automobile-world championship with eight races between January 22nd and September 2nd. The great price of Italy 1956 was the final race of the season. The participants had to come through 500 kilometers on the Autodromo Nazionale Monza at Monza. Ferrari used six race cars. Beside the regular pilots Fangio, Collins, Eugenio Castellotti and Alfonso de Portago, two further Ferrari D50 came to use for Luigi Musso and Wolfgang Graf Berghe von Trips. Fangio started from the pole position, but messed up the start.

Later he still reached the box with a damaged steering. Fangio, who was competing about the world championship, was able to enjoy a sporting gesture, which would not be possible today for reasons just because of regulations: The Briton Peter collins left his car with the start number 26 for Fangio in belief, still beeing young enough to become World Champion. The Italian Luigi Musso, who was asked by Ferrari to leave his car to Fangio, refused previously. The Argentinian secured by the generosity of Collins the 2nd place and won the title. CMC presents with the model of the Ferrari D50 a miniature of 1.161 parts in the format 1:18 out of diecast and high-end version with detachable bonnet, faithful, detailed-wired eight-cylinder and spoked wheels with hand-pulled, nippled stainless steel wire spokes mounted on aluminum rim.

The further features of the Ferrari D50

But these are just a few features of the model: Removable and lockable hood, movable windshield, both metal tailpipes, metal triangular front axle with oil pressure shock absorbers, De-Dion rear axle made of metal with trailing arm and oil pressure shock absorbers and a handcrafted, painted in stainless steel radiator grille with Metal struts are just as important as the detailed replica of the cooling system and the oil or fuel lines. Including: Moveable fuel cap and oil filler cap, cockpit with leather-covered driver's seat and headrest and screwable wheel central locks with authentic right / left-hand thread. A fantastic model that reminds of a big gesture!

Here: Click to the modelcars of the Ferrari D50 from CMC