11.01.2019For the fans of both worlds: modelcars concerning Stars from movies and TV

Greenlight is a specialist in the production of miniatures whose role models have made a career in motion picture film and television and presents novelties in 1:43 and 1:18 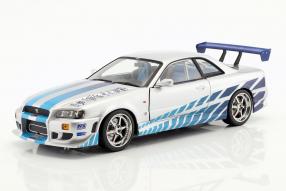 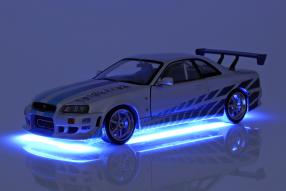 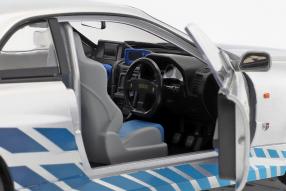 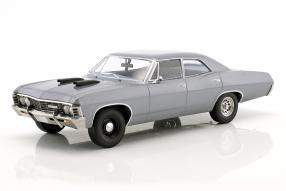 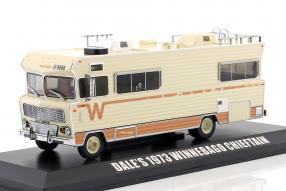 It's cold and wet outside, this are the right conditions to set up at home for a really cozy evening in front of the TV. The continuing success of streaming services such as Netflix, Sky or Amazon offers the film fan significantly more opportunities to be entertained than ever before. For the supporters of the TV series, comming from the USA,  the modelcar maker Greenlight delivered again some delicacies this week: modelcars, inspired by models that have elated in the thriller series or motion pictures, have appeared in the scales 1:43 and 1:18. We pick up the highlights and meet new cars and old acquaintances. The film series "The Fast and The Furious", which is located in the street racing and tuning scene, continues to enjoy uninterrupted popularity. Also there is a novelty.

And we want to start with that: Undercover cop Brian O'Conner had set, in the continuation of the first episode, which appeared in 2003 and entitled "2 Fast 2 Furious", on the Nissan Skyline GT-R, which already exists in several modelcars. This week we received the version in scale 1:18 with under-floor lighting through battery-powered LEDs. The batteries are not included in the diecast model with the article number 19041, but there are doors to be opened and a detailed replica of the interior with a harmonious appearance. The action series "The A-Team" became a long-time favorite on television for the assignments of Hannibal Smith and his friends Bosco "B.A." Baracus, H.M. Murdock and Templeton "Face" Peck. The series was most successfully aired from 1983 to 1987.

It tells about, how the former soldiers, who became hunted by the military police, help tricky people in distress. It goes without saying that they use cars for this purpose. In the scale 1:18, the 1907 Chevrolet Impala Sport Sedan 1967 appeared, to which the 1:43 version is also added (86527). Fans of Hannibal Smith & Co. will certainly be pleased, the modelcars are matching the appearance of the role model perfectly. Fans of the reality show "Gas Monkey Garage" will be pleased about the miniatures of the 1976 Ford Bronco (1934). Since 2010, the television series "The Walking Dead" thrilled the fans, in which a group of people, under the leadership of Sheriff Rick Grimes, have to face the consequences of a zombie apocalypse.

Police and zombies: Models in 1:43