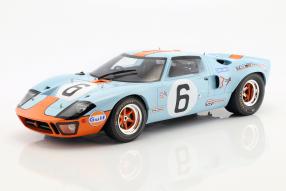 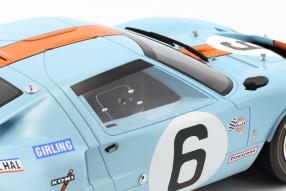 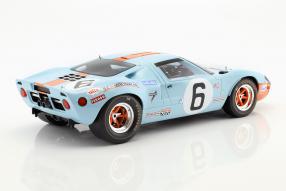 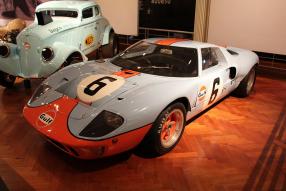 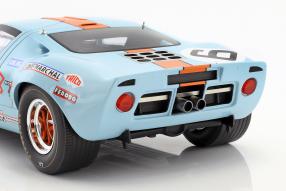 1968 followed by 1969: What is in the nature of the matter, the small series label CMR has recently manufactured again in 1:12 scale. Already in the previous year, they brought a model car of the Ford GT40 in the trendy size, whose model won the 24 Hours of Le Mans in 1968. This year is a new edition, this time in the look of the winning car of the 37th edition of the traditional race at the Sarthe. The team J. W. Automotive Engineering Ltd. continued to rely on the Ford GT40, which was indeed inferior at top speed of the Porsche and Ferrari racing sports car, but had proven over the years to be extremely stable. In 1969, Jacky Ickx and Jackie Oliver drove the same vehicle that Pedro Rodríguez and Lucien Bianchi won the year before. And for the 1969 edition, the model car is now in 1:12 available.

John Wyer was a well-known motorsport engineer, team leader and race director, who founded his own team together with his partner John Willment in 1965, wrote motorsport history with the support of sponsors Gulf Oil: 1967 still without success, but with the Ford GT 40, he won the legendary endurance race at the Sarthe between 1968 and 1969. Drivers and team owners would certainly have had a great pleasure in the model car from CMR, which exactly matches the appearance of the glorious prototype and with its length of 36 centimeters, is also ideal as a single piece for a desk or sideboard. For comparison: In the commercial scale 1:18 it would measure 22.57 centimeters. We can assure revered collectors that the details on the bodywork: the air intake in the front and the interior are first-class workmanship.

CMR builds the model cars out of Resine plastic; the polyurethane casting resin, which makes less demands on mold making and makes such highlights economically possible. With the No. 6, the owners of the previous year's edition now have the opportunity to present themselves and the guests at home a great ensemble. The 24 Hours of Le Mans 1969 were held from 14th to 15th June 1969 at the Circuit des 24 Heures. Ickx and Oliver completed a total of 372 laps or 4,997.880 kilometers on the 13.469-kilometer circuit with the Ford 4.9-liter V8; the average speed amounted to 208.545 km / h. Of the 109 registered participants, 45 started; only 14 were scored. An impressively number of 400,000 spectators attended the race in warm weather, but were refreshed again and again by showers.

Here: The Ford GT40 from CMR in our webshop