In 1983, Ayrton Senna tested the car in which Nelson Piquet was the first turbocharged World Champion in history of F1. 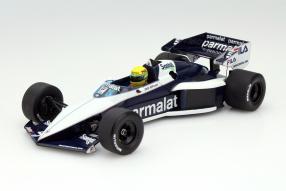 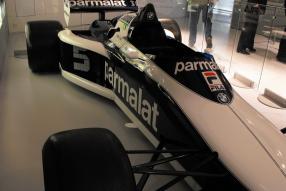 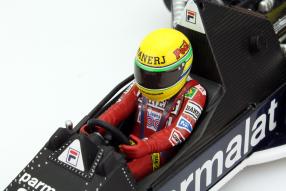 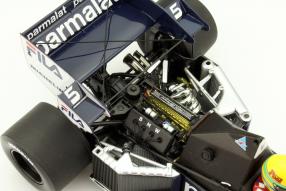 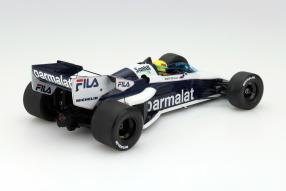 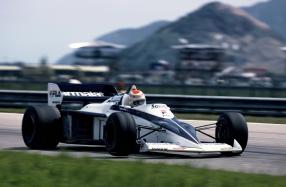 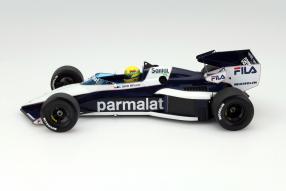 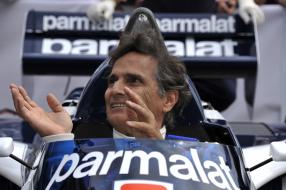 How well the company Aachener Minichamps is at the construction of  model cars , you can see  when you look under her skirt - pardon, under the hood of course. For what is revealed in that moment when the collector takes off  the engine cover and looks at the replica of the 1.4-liter four-cylinder engine of the Brabham BT52B, nothing else than the  dream of  model car fans come true.

Minichamps has made itself world champion  with the finish and the details of the model for the 1983 launched BT52B  . Amazing , what the team around Paul G.and Romy  Lang and Romy  have done  with this model, that is available for a avery good price of  129.95 euros under item no 540831899. We look at the details and look simultaneously back to the year 1983.

The Brabham BT52 - the first champion with Turbo

What today is in every small car, was not even fully developed  in 1983 even in Formula 1: The turbocharger; a technique that was invented 1905. But only in 1975 with the Porsche 930 Turbo and 1973 with the BMW 2002  the technology went to series production for passenger cars . We only mention BMW  second, because we are creating the transition to the manufacturer of the engine of the Brabham 52B better.

The four-cylinder was constructed by Paul Rosche and performed a fabulous  1,030 kW / 1,400 PS at qualifying.  Rosche: "You can't tell exactly for  the measurement scale of the dynamometer ends at 1,280 hp." The engine with the designation M12 / 13 was the highest stage of development since 1961 incorporated into the series-BMW driving source, offered 16 valves for ventilation and brought the first digital engine electronics in F1.

The first versions of the formula 1 contributed 488 kW / 650 hp; Rosche managed to get out  20 times the performance of the basic model out of the same displacement over time. The company Renault, however, was the one who brought the turbo to F1 in 1977  and imported the first victory of this technique in 1979 . But BMW contributed  the ultimately better job: After 3 victories and 59 points in 1983, the Bavarian carmaker picked in Bernie Ecclestone's cooperation with team Brabham Racing Organisation by Piquet the first world title for the turbo technology.

As mentioned before Minichamps has earned this also for the finish of the 165 kg heavy model engine. Take a look at the crossflow cylinder head with finely simulated spark plug cables; admire the structure of the valve cover and  the chrome pipes behind the exhaust manifold. We are dazzled.

Cylinder head and radiator are the eye-catchers


Discover the turbochargers and don't forget  to also admire the detached  cooler after removing the cover of the engine,  that the professionals of  Aachen have modeled perfectly in appearance. The chassis, the rear axle, the structure of the gearbox housing - all these details  Minichamps put in the   model world champion like.

We believe that the engine, which is also found in a variation in the models of the BMW M3 Series E30, is the highlight of this miniature. That  the struts at the rear spoiler and the design of the cockpit fulfill the highest demands on the model equipped with steerable front wheels is understood. The price is more than adequate considering the quantity and scope of facilities .


The model was designed by designer Gordon Murray, who designed the ultra-flat BT55 for 1986 and switched to McLaren late 1986.  There he was, inter alia, responsible for the sports car F1. Bernie Ecclestone invited  the racing drivers Ayrton Senna, Mauro Baldi, Pierluigi Martini and Roberto Guerrero to test drive at the French circuit Paul Ricard in order to find a team-mate for  Nelson Piquet on November 14th 1983. But Senna was two seconds slower than the world champion.

The reason: Piquet and Senna did not like each other. The Brabham driver had given the mechanics the instruction  to adjust the set up of BT52B intentionally ; Therefore Senna could  not make a good time. With the setting of the main sponsor Parmalat, to not want to have 2 Brazilians in the cockpit, the problem solved itself and the Italian Teo Fabi got a contract.

At the end a personal story that connects the author of this blog to the motor of BT52B: "As a guest in the box of Brabham 1983 in Spa-Francorchamps I accidently kicked a downed turbocharger. Back then everything was a little bit looser.. So when the team-mate of Piquet - Riccardo Patrese - failed with a turbo damage it was clear to me that I was to blame. With my head down , and driven by the desire not to be caught, I left the racetrack. Almost certainly I had nothing to do with the loss, but the thought of it drives me crazy until today. "The model from Minichamps is characterized by the way by the revised version of the BT52, the BT52B, which was used in the last 7 of the 15 races of the season 1983.

Until today the vehicle impresses  with its arrow-shaped design in the style of the 1980s and the mighty power of his engine. That the Brabham BMW BT52 can show its qualities  on the track again is due to the authorities responsible for historic motorsport team of BMW Group Classic. In 2013 - exactly 30 years after Nelson Piquet's triumph - the racer from the automotive retirement was brought back to the slopes.

At the extensive restoration  many mechanics who were involved before more than 3 decades took part in its development - including Paul Rosche. The result was to be  experienced at the Goodwood Festival of Speed in July 2013 for the first time. Participation in the Legends Parade in Austria on the occasion of the GP of Austria on June 21st, 2015 was the third appearance of the Brabham BMW BT52 since its revival. At the wheel: Nelson Piquet.