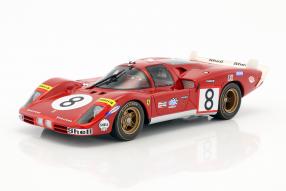 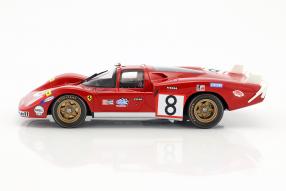 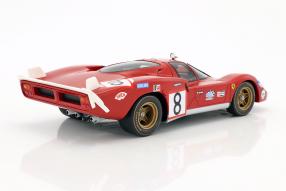 The legendary 24-hour race at the 24 heures circuit celebrates its 86th edition this year on the 16th and 17th of June. Toyota will try to get the overall victory With the TS050. But is a possible victory worth something? Of course, holding the cars over the distance of almost exactly 5,000 kilometers spread over 367 laps is always an enormous achievement, but if the opponent is called Porsche, a victory is doubly worthy. But the series winner from Le Mans is represented this year only with the Porsche 911 RSR, no longer plays in the prestigious class LMP1. The chances rise for Toyota, but somehow leaving a bad taste: Would they have made it, if the Stuttgarters had participated? That and not otherwise will be the question, if the Japanese win. Already in 1970, Porsche was a fierce opponent; especially for Ferrari.

And that brings us to the model car that the small series label CMR has now brought to us on the shelves. It recreates the Ferrari 512S, with which Arturo Merzario and Clay Regazzoni have tried to win the 38th edition of the Le Mans 24 Hours on June 13 and 14, 1970. The year before, Enzo Ferrari had also sold shares in Fiat to build the new prototype for Le Mans. It was designed against Porsche 917, but came a full year later than the Stuttgart Bolide. Porsche had just lost Le Mans in 1969 with the 908. The factory team S.E.F.A.C. Ferrari came to Le Mans with four 512S; The Scuderia Filipinetti, the Ecurie Francorchamps and the North American Racing Team also relied on the new development from Maranello.

In the year of its debut, the 512-liter 5.0-liter V12 produced 368 kW / 500 hp. In Le Mans Merzurio and Regazzoni put on the long version, which is therefore also the prototype for our model. CMR met the racing car exactly in its appearance and delivered an excellent surface quality. The mold makers have translated the air inlets on the bow and sides very well. Inside the high-quality polyurethane resin model, knowledgeable details such as instruments to belt straps are retold. Porsche won the race. The first of 19 overall victories. The most successful 512S landed in 4th place; on the 44th rank was still the model for our model. But in our collector's heart it is at the top of the podium.