Who wants to take account of the forthcoming race weekend in Belgium should close their gaps in the collection:Last years models are getting rare 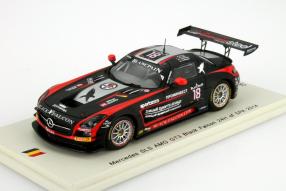 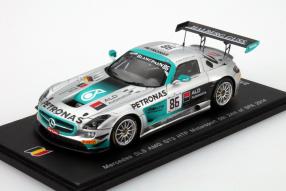 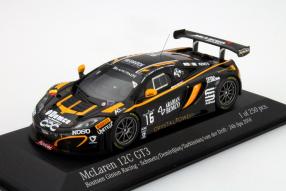 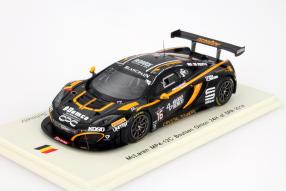 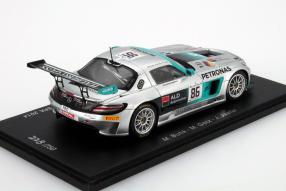 On the weekend of July  25th and 26th  2015  58 race cars are going to start at the 68th edition of the 24 Hours of Spa-Francorchamps; the traditional  race, which was launched just 1 year after the first 24-hour race at Le Mans .  As model car fans know the small series label Spark is  pioneer in the reduction of the participants whole starter field. This is also the  case of the 24 Hours of Spa of 2014 but the stock of model cars from them are  noticeably melting away. We take the upcoming race weekend to see which model cars from the previous year could still make it to your showcase. Audi has won the 24 Hours of Spa-Francorchamps past year; about the winning car, the other Audi and the Audi R8 LMS in 2015 we reported on the blog post that can be accessed via this link.

Here and now we first look  at Mercedes-Benz. The Black Falcon GmbH & Co. KG has established itself as a successful international motorsports company since its founding in 2006. The team is headquartered in Meuspath, directly at the Nürburgring. In the new building, the company looks after customers sporty vehicles and prepares the cars for their assignments . Among others, Black Falcon has achieved 3 title wins in the VLN Endurance Championship Nürburgring - 2008, 2009 and 2011 - and presented the 2009 champion of the Seat Leon Supercopa. The winner is the team Black Falcon and the 24 Hours of Dubai 2012. At the 24 Hours of Spa in 2015  the people from  Meuspath bring 2 Mercedes-Benz SLS AMG GT3 in class "GT3 pro" and another " GT3 pro am"  to the start.


There is still one  amazing model car available from last year,  that Spark turned to be the rolemodel of Black Falcon SLS AMG with the start number 18. The black model with red stripes and an eyecatcher painted in silver in scale 1:43 applies as one of the most beautiful SLS AMG GT3 car models among collectors  and was limited to only 500 copies; available under the item number SB085 for 59,95 Euros. In keeping up with the high standard of Spark, the team around Hugo Ripert implemented every little detail in the world's most widely used model car size, from front splitter to the suspension of the rear wing, the appearance of the model exactly. The model was - like the below presented miniatures - made of the polyurethane casting resin .


Not any  less successful and in accordance with  the colors of the cars of the Mercedes AMG Petronas Formula 1 team the racing cars with which the team HTP Motorsport have intervened at the 24 Hours of Spa 2014 : The driver Maximilian Buhk, Maximilian Götz and Jazeman Jaafar took the Mercedes-Benz SLS AMG GT3 to 5th Place. The in appearance and shape as polyphonic car model in scale 1:43 is available for 59.95 euros under the item number SB075 and limited to 750 copies. Friends of pretty race cars models will certainly have their fun with the McLaren MP4 12C, which is offered by  Spark for 59.95 euros and 79.95 euros for the Minichamps identical miniatures. For example, the race car of Team Boutsen Ginion that participated with the drivers Sarkissian, Demirdjian, Van der Drift and Schmetz in the hunt through the night. The black McLaren MP4 12C has been reduced by Spark in a number of 500 (SB088).


Minichamps brought it in an edition of 250 copies (437 141 316). Which model car now is the better of the two?  Spark makes a thorough impression because he molded the Carboniferouss better  and the lattice work quality in the front apron. Even the air outlet on the front hood has been transposed by Spark from the perspective of building the forms carefully into the model. Even with the coloring of the interior Spark is one step ahead. Why  the imprint of the rear wing  is different from Minichamps to  Spark, is a mystery to us because it is a model to the same car. Also suspension and housing of the exterior mirror is more filigree at Spark. That the model is 20.00 euros cheaper, makes  Spark the final winner of the comparison.But who will win the 24 hour race at Spa-Francorchamps 2015 ?: On the website of the event is a lifestream where  the race can be followed.