With street-cars black and silver dominate, but in motor-sport is everything more colourfull. One colour stands out: Gulf-blue 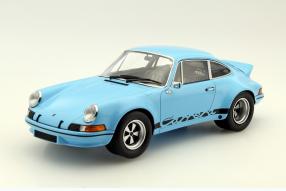 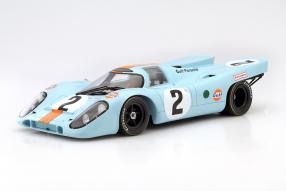 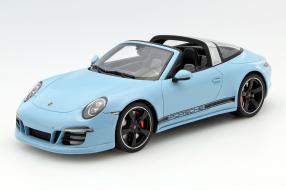 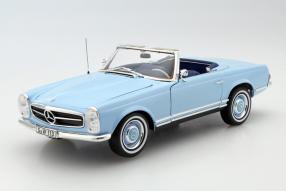 Hello, dear friends of the well-groomed Modellautos, for the week we want to draw attention to something that we like very much: the color Gulf blue, which we mainly know from the motorsport, which is by their popularity but on one or other road car to see . The life-like, bright color was used by the US company Gulf Oil above all in the 1960s and 1970s to paint the Gulf-sponsored Rennteams and thus became a worldwide popularity. The brand name of the oil company founded in 1901 is still in use today and belongs to a subsidiary Cumberland Farms, a retailer in the USA, which operates petrol stations at its branches. The Indian Hinduja group markets the name outside America; Since 1997, Gulf stations have been opened again in Holland.

However, the great, glamorous time of the blue-painted racing cars is due to Gulf Oil's commitment to the merger with Standard Oil of California, known by the brand name Chevron, which was carried out in 1984. In the well-stocked specialist retailer, there are still fashionable leather jackets in the characteristic Gulf blue, whose popularity in connection with the motorsports history is unbroken. We are then with the Modellautos; The division, within us the hue of the year in a somewhat different way, but there is omnipräsent and often also miniatures brandneuer role models. For example, the McLaren P1 from True Scale Miniatures after the Supersportwagen from 2014, which the small series label under the item number TSM164331 has just presented in the scale 1:43.

Also with him the traditional color is complemented by a correctly cited orange strip. Of course, we can also find this at the scale of TSM Models - True Scales abbreviation - in the 1:12 scale, the Porsche 917 K, which ended the 24 hour race of Daytona 1970 as a winner; The madness model is under the number TSM141204 to have and limited to only 300 copies. The second-place Porsche 917 of this race minichamps down to the scale 1:43 and quotes the Gulf blue thus likewise (433706701). We stay with the Aacheners, because with the Porsche 911 Carrera RSR 2.8 of the year 1973, Paul and Romy Lang and their team bring a fantastically beautiful, to the last detail, perfect hammer model in the 1:18 scale in Gulf blue (107065021), the Many, lovingly made details in the interior scores.

Competitor GT-Spirit has recently produced a 911 Targa 991 / I in 1:18, which is also painted in Gulf Blue and limited to only 300 pieces (WAX02100010). You will find a Tyrell Ford 007 from the Formula 1 1976 in Gulf colors as well as numerous models for motor vehicle sports cars in this paint finish: More McLaren, Ford GT, even a Renntransporter - it will be an exciting, varied collection One is oriented to the color Gulf blue. And the favorite of the blogger? Mercedes-Benz was the name given to this variation of this traditionally rich blue, which was last seen on a 1: 18 miniature of the 230 SL from 1963 (B66040633) and as a commercial model in the typical Mercedes-Benz classic. A good start to the week!

Here: Click on this link to get an overview of all models in Gulf-Blue