Spark has set a great monument to an icon of sports car construction: the model car has scored with loving processing. More to this and to 1957 here in this blog. 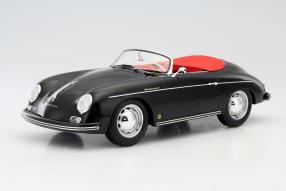 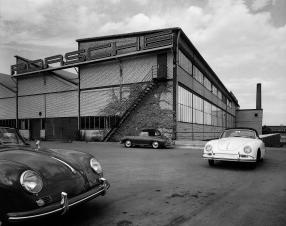 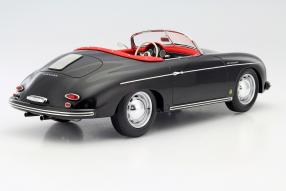 On 10 January 2017 we presented the Porsche 918 Spyder hybrid from GT-Spirit in the 1:12 scale. Anyone who has been wondering what modellauto might look good in the showcase next to this grand achievement, can now access the Porsche 356 Speedster from Spark in the same frame size. Spark has delivered an elegant, black model of the classic from Zuffenhausen and impresses us with a miniature that fits in perfectly with the details of the model. As usual, Spark decided to use Resine plastic as main material, so doors and hoods remain closed. Let us look back on the year 1957 in the context of the famous Throwback Thursday; The year from which the model of our car model published under item number 12S002 originates.

At the moment, the EU is in a crisis; Great Britain is preparing to leave. In 1957, the predecessor, the European Economic Community (EEC) was set up; Still without the English. At the Bundestag election, CDU and CSU reach the absolute majority with 50.2 percent of the second votes. The bitch Laika flew with the Russian Sputnik 2 into the earth orbit. The TV show "Zum Blauen Bock" celebrated her debut; The musical "West Side Story" the premiere. In Portugal, men are allowed to swim in swimming trunks instead of swimsuits. What do they say? The Porsche 356, however, existed before 1957, also as a speedster. It was built as a Porsche 356 A from October 1955 to September 1959 as Coupe, Cabriolet and Speedster as well as from 1958 as Convertible D, also starting from 1958 as so-called Hardtop with non-removable roof.

Completely different HP than the usual at Porsche today

The motorization was combined with a four-cylinder engine for all body versions, which developed 44 kW / 60 hp or 55 kW / 75 hp for the 1600 and 1600 S models from 1.6 liters. Switching was carried out by means of a four-speed manual transmission. The top speed of the basic versions: 160 and 175 kilometers per hour. As usual in Beetle's day, the body was sitting on a floor. Porsche quantified the production figures as follows: A total of 21,045 copies were sold from the 356 A; At a price of 11,400 to 15,750 DM. The body of the 356 measures 1:12 in the length 33 cm. For comparison: 22 centimeters would be in 1:18. The model consists exclusively of rounding, which the mold makers of Spark have met perfectly. A feast for the eyes are the timelessly sparse fittings and the lovingly reconstructed interior.

Showcase would be recommendable

All in all the model is not quite the low price, but for fans of the brand is a real deal. Unfortunately there is no showcase, which seems to us in view of the filigree interior absolutely recommendable. We can very well imagine how good the 356 will look next to the 918. You too?


By the way, click here and you will land on our Twitter channel, which will keep you up-to-date on all news!