20.10.2021Two models with gigantic dimensions and extremely high functionality as an absolute eye catcher for every collection

Mercedes-Benz Actros and Scania V8 730S as a set with Lohr car transporter in 1:18 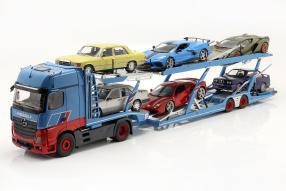 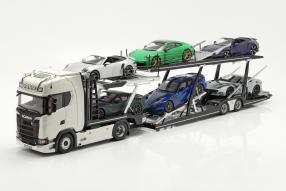 In today’s blog article, we present two models with high functionality and dimensions, which ensure that they are hard to miss. NZG presents the Lohr car transporter Mosolf, pulled by a Mercedes-Benz Actros truck unit in scale 1:18. Scale 1:18 in this case means that the model has a length of 1250mm, a width of 170mm, a height of 220mm and a weight of 10.2kg. In addition to the dimensions, which are a real eye-catcher in every collection, the wide range of functions is no less impressive. The NZG model has a true-to-original interior, including adjustable armrests and a detailed control console. The doors of the driver's cab can be opened and the front wheels of the tractor can be steered. The model is kept in the company paint scheme of Mosolf and has some lighting features. The Mercedes star, the taillights, the daytime running lights and the upper cabin lighting are just as functional as the interior lighting. The driver's cab can be tilted and thus offers a view on the Actros engine, which is true to the original as well. The lock on the fifth wheel ensures that the trailer is optimally held. Two brake wedges are included in the scope of delivery. The upper platform of the trailer can be lowered. A total of 8 car models in 1:18 scale find place on the loading area. The model, in which both the front and the rear service flap can be opened, has a spring-loaded chassis.

The Scania V8 730S with Lohr car transporter is also available from NZG in our shop. The dimensions are similar to those of the Actros model described above. Here, the front axle can be steered as well and the driver's cab tiltable, which in this case reveals the Scania's V8 engine, which has been faithfully reproduced. The Scania also has a sprung chassis and an adjustable roof spoiler. As with the Actros, the armrests of the Scania are adjustable and the front and rear service flaps can be opened. With the optional accessory set 10192 you can upgrade the Scania with a few additional chrome parts (not included). Two brake wedges are included in the scope of delivery.