23.07.2021Bburago brings a Hypercar at a top price-performance ratio

The top-version of the Ferrari FXX-K Evo, which is based on the street legal Ferrari LaFerrari, is delivered by Bburago. Aerodynamics and extreme power define the race car from Ferrari 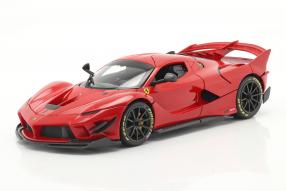 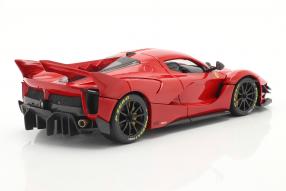 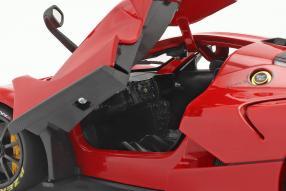 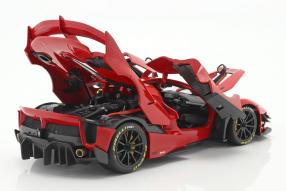 Ferrari sends the Ferrari FXX-K Evo Hybrid in scale 1:18 into the race. The model of the hypercar from Maranello with item number 16012CAR is limited to a number of 3000 pieces. The fact that in a model in this price range, in addition to the faithfully reproduced interior and the detailed engine compartment, the bonnet, doors and trunk can also be opened shows the good price-performance ratio that Bburago creates with this model. The red big brother of the LaFerrari, in which a V12 engine together with an electric motor generate over 1000 hp, is a real eye-catcher in every showcase.

With the FXX-K, derived from the LaFerrari, Ferrari brought a weapon onto the market for the more select clientele of customers. With the Evo version, Ferrari is once again putting the crown on the non-street legal hypercar. Anyone who thinks that they have already achieved a masterpiece of design and engineering on the test track in Fiorano with the LaFerrari, the later “stem cell donor” of the FXX-K, will love the FXX-K Evo Hybrid. In addition to the steering wheel reminiscent of a Formula 1 car and an improved chassis, the FXX-K Evo Hybrid brings an additional 640 kilograms of downforce towards the asphalt at 200 kph compared to the LaFerrari. This impressive value is due to the racing history of the Ferarri Design Center, which has given the hypercar a mighty rear spoiler in addition to various air inlets.

The sports car manufacturer from Maranello has planted an electric motor in the FXX-K Evo Hybrid in addition to a 6.3 liter V12 with 860 hp, which adds another 190 hp to the driving pleasure. Both together come to a system performance of 1050 hp. The 750 Nm torque of the combustion engine is increased to 900 Nm by the electric motor. In order to be able to set everything you can set in terms of driving dynamics options on the FXX-K Evo Hybrid by yourself, you almost have to be an engineer. However, if you want to call the role model of the Bburago model your own, which is limited to 40 units, you have to dig deep into your pocket. The price tag from Ferrari says a purchase price of around 2.5 million euros before taxes.

Here: Click to the models of the Ferrari FXX-K Evo Hybrid in 1:18