Next weekend, after seven years, the royal class of the motorsport turns back to the Nürburgring. The F3-Champion 2018 makes his debut in front of the home audience in the F1 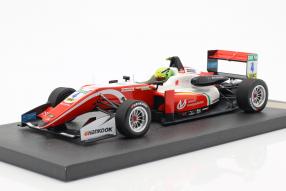 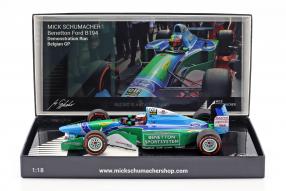 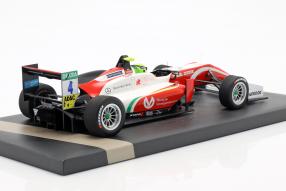 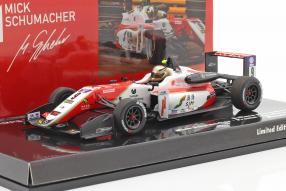 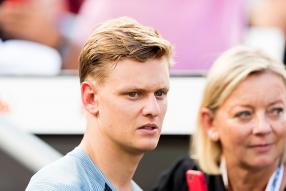 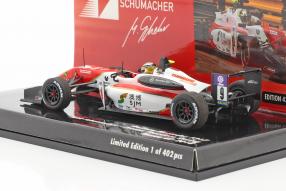 It is a really big thing: Mick Schumacher receives the chance to test with the support of the brand with which his father Michael has become world champion five times in a row, on Friday in the first free practices of the so-called Eifel Grand Prix at the Nürburging. The seven time champion had won the world championships from 2000 to 2004 for and with Ferrari. Mick is now allowed to climb into a Formula 1 for the first time in front of a home crowd with the Ferrari-equipped Alfa Romeo by Antonio Giovinazzi; He has already completed tests in Fiorano with a Ferrari SF71H from 2018. Schumacher got into karting in 2008, switched to Formula 4, joined Prema in 2017 in European Formula 3 and won the title with this team in 2018; his first championship in formula racing. A way that the modelcars trace.

After winning the title, it traditionally went to Macau for the 65th Suncity Group Macau Grand Prix of the FIA Formula 3 World Cup. Mick Schumacher took fifth place on the street circuit in Macau, as reminded by the scale 1:43 modelcars from Minichamps. The miniatures with the item number 517184309 reproduce the Dallara F317 from SJM Theodore Racing by Prema and thus Schumacher's car in Macau 2018 and are limited to 402 units and belong in every collection to Michael Schumacher's son: Now is the time to put them on. The set that includes this model alongside the modelcars from Schumacher srs. Reynard F903 from WTS Racing shows - the winner of Macau 1990 - Minichamps is offering 333 units limited under item number 512901839. Mick's vehicle is also available from Minichamps in scale 1:18 under 517181809.

Of course, you come to the modelcars in the formats 1:43 and 1:18 via the link embedded below, which were created on the occasion of winning the title in the Formula 3 2018. The audience of the Grand Prix of Belgium 2017 experienced an emotional moment in a very special way: Before the race in Spa-Francorchamps, Mick Schumacher sat down in the Benetton B194-05; so the chassis which helped his father to his first Formula 1-world championship in 1994 and with which he also won the following races in Imola, Monaco, Canada and France. This appearance stirred the fans to standing ovations. The modelcars from Minichamps bring this demo round to life in an edition of 594 pieces on a scale of 1:18. The diecast models are listed under item number 113941705 and, like the helmets in 1:2, benefit from the golden autumn campaign.

Schumacher switched to the European FIA Formula 2 Championship with Prema in 2019, where he finished 12th in the drivers' championship after just one win, but was accepted by Ferrari into the Driver Academy in the same year. This also includes Callum Ilott and Robert Shwartzman, against whom Schumacher has to assert himself in Formula 2 in order to be able to advance to Formula 1 in 2021. Currently, before the last two race weekends in Bahrain from the end of November, Schumacher is ahead with 191 points of the Briton Ilott with 169. Shwartzman occupies fifth place with 140 points. There are still two sprint races and two main races ahead of the drivers: Schumacher has good chances and our editorial team wishes the 21-year-old all the best. The photo by Sven Mandel shows him with Sabine Kehm, the long-time confidante of his father, at Soccer: Champions for Charity 2019.

Here: Click to the modelcars with the topic Mick Schumacher