The French from Norev remind with the modelcars in scale 1:18 how technically advanced the car industry was in the 1930s 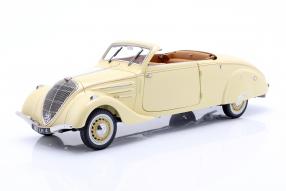 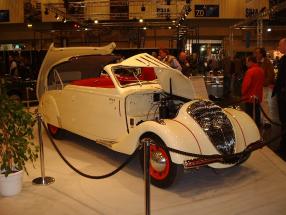 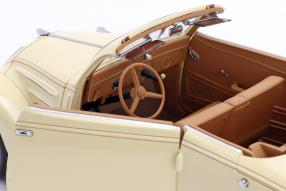 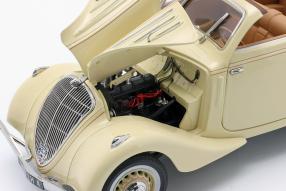 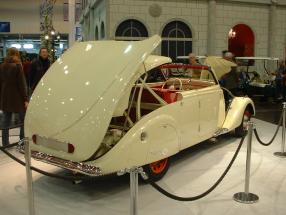 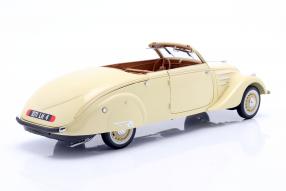 The readers of this blog may forgive the editorial staff with the slight misleading in the title of this article: The Peugeot 402 Eclipse has actually nothing to do with the cultural movie about the time travle of Marty McFly! However, the title matches really well to the Peugeot, because it was extremely ahead of his time with the retractable roof convertible from 1937. The modelcars from Norev set the vehicle a corresponding monument, which after converting the purchase price turns out to be in the luxury class: 150,000 euros or 36,000 FF at the time had to be paid for it. Norev equips the miniatures with the item number 184872 accordingly. The diecast models in the contemporary beige / caramel color have a prototypical retractable roof hardtop as well as doors and hoods that can be opened.

According to the trade magazine "La Vie de l'Auto" of the publishing year 2002, just 473 units were produced of the Peugeot 402 Eclipse, due to the high price; a total of 75,000 Peugeot 402 left the assembly line in 16 fabulous body styles in Sochaux between 1935 and 1942. The streamline design with the head lights, hidden behind the radiator grille, was highly modern at the time. But also a look at the details is worth it, because here one can recognize of what the French car manufacturer was able to do already back then. The folding roof made of sheet metal, developed based on a patent from Georges Paulin, was the first electrically retractable hardtop in car history! Recessed door handles, security mortise locks, a twelve-volt system and, optionally, an electromagnetic three-speed Cotal preselection gear were already available for the 402 Eclipse!

The modelcars from Norev bear the year 1937 in the designation. This means that the correctly scaled engine replicates the four-cylinder with a displacement of around 2.0 liters that offered the Peugeot 40 kW / 54 hp. Norev has done an excellent job with this component in particular, because the reduction in size of the drive set with its double-wing hood and the reproduction of cabling and ancillary units is a real blast in this price range of less than 70.00 euros. The model's folding roof technology is also impressive; Appearance and basics such as lines and interior fittings anyway. The top-quality models of the E4Y type are also relatively long at just under 30 centimeters, as the original was based on the four-seater sedan version. Our conclusion: A great reflection of an early masterpiece.

Here: Click to the modelcars of the Peugeot 402 Eclipse