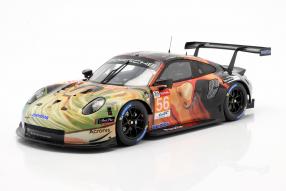 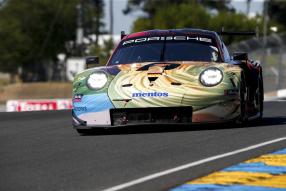 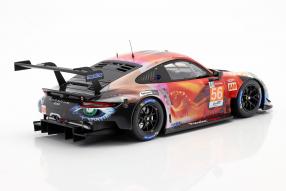 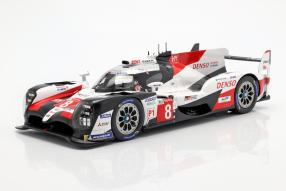 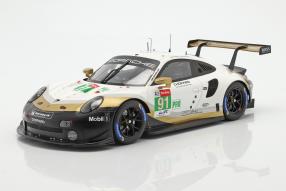 We still have to be patient for exactly 2 month until the engines roar at the Sarthe again: This year's 24 hours of Le Mans have been postponed on September 19th and 20th, 2020, because of the corona crisis. Thus, the 88th version of the traditional race takes not place in summer: If the feeling on the Circuit des 24 Heures will be impaired? All class winners from the last year are authorized to start: Toyota Gazoo Racing for the LMP1-Class, Signatech Alpine Matmut as winner in the LMP2-Class and the winner of both GT-Classes LMGTE Pro and AM, AF Corse and Team Project 1. And to the latter Porsche 911 RSR as well as to the second placed of the category LMGTE Pro form 2019, Spark released two modelcars, which we want to take a closer look at. Curtain up for the review of the time before Covid19.

A class winner and a second placed of the 87th version of the 24-Hour-Race of Le Mans from 2019 were chosen as the role models of the high quality produced modelcars of the Porsche 911 RSR in scale 1:18 by the Spark team. In addition to the colorful nine-eleven of the team Project 1 with item number 18S440, the collectors can now also park the 911 RSR of the Porsche GT Team in the showcases (18S434). The first mentioned model replicates the winner of the category LMGTE Am, which was driven by Jörg Bergmeister, Patrick Lindsey as well sa Egidio Perfetti under the starting number 56. The steering wheel of the second placed factory-Porsche in the class LMGTE Pro with number 91 was controlled by Richard Lietz, Gianmaria Bruni and Frederic Makowiecki. As usual, the miniatures are characterized by high quality workmanship.

The renowned brand has again decided to use the polyurethan cast resine as the main material. Though, the doors and hoods remain closed with this material usage, small series as these are only economically viable because of the low demands on mold making through resine. One beforehand: The makers from Spark hit the appearance of the role models perfectly, which is not self-evident in terms of curves - and a Porsche 911 actually just exists of curved components. The impression is in perfect harmony with that of the role models. The finish of the models is particularly impressive in the area of the front bumper, whose splitters and engravings are particularly eye-catching. Spark also did an excellent job with the replicas of the headlights, the antennas and the rear end: Quality down to the last detail!

Price tip on the edge: The overall winner as model

From the perspective of the editorial staff, these modelcars should not be missing in any collector's showcase and lead us back to the review on 2019: Sébastien Buemi, Kazuki Nakajima as well as Formula 1-world champion Fernando Alonso crossed the finish line as the overall winner. Under the item number TY14118LM19, by the way, Spark and Toyota brought a limited version of the victorious Toyota TS050 in format 1:18 on the market. Only a very small number is available at an affordable price. 69 cars were registered in the four racing classes; 61 of them started in front of 252,500 spectators on the race around the 13.626 km route and 47 were scored. The race started by Charlène of Monaco and carried out in summer weather counted as the 8th run of the FIA World Endurance Championship 2019.