We consciously start to come down not with PS-strong sports cars, but with the forefather of all Polo&#039;s in scale 1:43 out of diecast 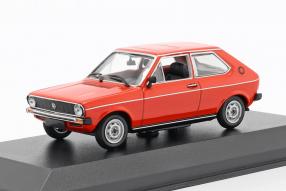 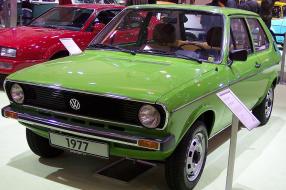 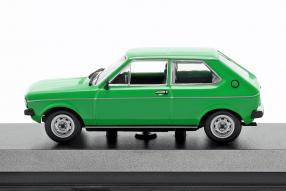 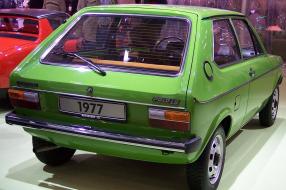 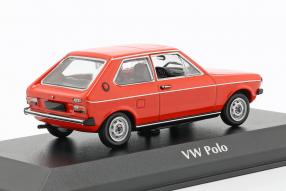 In the past days, motorsport was the main topic in our blog: Powerful racing cars with many PS and its models have set the article content. So the team from the editorial thought that we would do everything differently at the start of the new week: A small car from 1979 is today our car of the day, the VW Polo, the modelcars for the first edition of this successful vehicle from the Volkswagen Group. As part of his Maxichamps series, Minichamps has unveiled two new scale 1:43 miniatures, which pick up the usual color scheme of the 1970s in a bright red and garish green livery. Times when the street scene has not yet been dominated by silver and gray tones, which are better to be used in used car sales, or by black, but by the enjoyment of life in the form of colorful colors.

And the modelcars of the Polo remind us to this. From 1974 to 1978 the Audi 50 had been built, which Volkswagen has presented in significantly emaciated equipment in 1975 as VW Polo. The absolutely identical cars differ only by the logo in the grille and the inner values. The Type 86, as the Polo was called internally at that time, represented until 1981, the entry-level model of the brand. Legendary: The door panels of the base model were made of cardboard; the passenger side had no lock cylinder in the door lock; the door contact of the interior lighting, the sun visor and the upper handle were missing there. The role model of our modelcars is the better-equipped L-variant, which the expert immediately recognizes on the rubber bumper strips on the chrome bumpers. And on the badge on the tailgate of the basically three-door delivered oblique rear.

Maxichamps called the modelcar with the date 1979; the year in which the chrome bumpers were installed for the last time; up from autumn, the production was converted to plastic bumpers, analogous to the Golf. The grille received a plastic mask. The engine range included power units with four cylinders in series, the displacement of which is specified with 0.9 to 1.3 liters. The power range ranged in 1979 from 29 kW / 40 hp to 44 kW / 60 hp; 61 to 93 Newton meters (Nm) maximum torque was passed through to the front-wheel drive. Shifted was exclusively by hand and via four speed transmission. Depending on the engine, the polos reached 132 to 152 kilometers per hour at top speed. In 21 or 15 seconds, the driver was able to accelerate to 100. Well, what do you think: Is that not really a real contrast to the sports cars in the blog from last week?

Here: Click to the modelcars of the VW Polo 1979