Due to the European debut of this year&#039;s season of the royal class of motorsports, the Aachener deliver a variety of miniatures in 1:43 and 1:18 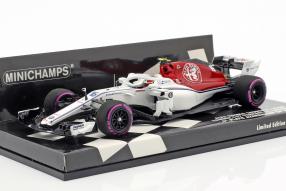 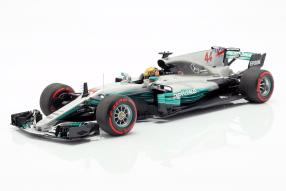 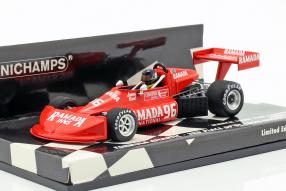 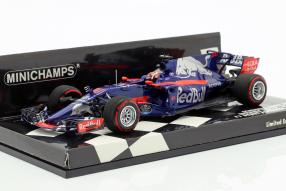 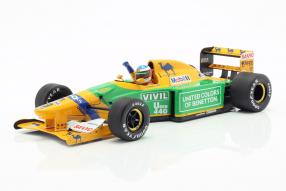 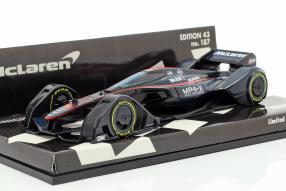 Next weekend the Formula 1 starts for the first time this year on european ground. Let's hear the motorsports-boss from Mercedes-AMG F1, Toto Wolff, to the Gran Prix of Spain in Barcelona: "After the winter test drives, nobody had predicted four Mercedes double victories. Nevertheless we succeeded and achieved 173 points in the first four races. That is a remarkable result, which especially is a confirmation for the fantastic work of every team member. Our dedication to this task, our vicotry hunger and our passion for racing are stronger than ever!" Our love to the motorsports reflects in the modelcars, which we have ready for you. Minichamps delivered numerous novelties in scale 1:43 and 1:18 this week, which we want to present here briefely.

As a highlight of the Minichamps deliveries, the fans are likely to look at Lewis Hamilton's campaign car from 2017, the modelcars of the Mercedes-AMG F1 W08 come in the decoration of the Mexico GP, in scale 1:18 and in an edition of 1,104 pieces to the collectors. Incidentally, the diecast models with item number 110171844 are identical to those, which appear as the second placed of the race at the time, the Valtteri Bottas racing car number 77 (110171877). Friends of the Formula 1 should also be enthusiastic for the miniatures of the Camel Benetton Ford in the format 1:18, with its role model Michael Schumacher achieved the third place at the German Grand Prix 1992. The models of the Benetton B192 with driver figure and raised fist are made out of diecast and are limited to 300 units (110920099).

The Aachener have given full throttle with the 1:43 models of the Formula 1, because there are current cars as well as miniatures after historical models. Inspired by the present are the three modelcars of the Williams FW40 by Williams Martini Racing, which come to the collectors in the decorations of the Abu Dhabi Grand Prix 2017; The cars of Lance Stroll are limited to 250 pieces (417172018), of Felipe Massa to 550 copies (417172019) and the test car of Robert Kubica to 250 units (417172040). The debut of Pierre Gasly in the Formula 1 at the Japan GP 2017 is reminiscent of the model of the Toro Rosso STR12 (417171410). In the databases, however, read that Gasly gave his premiere in the premier class in Malaysia.

They look like racing cars from the Formula 1, but went to the start of the Formula Atlantic. The history of this racing series, similar to the Formula 2 and Formula 3 regulations, began in the United States in 1965, before reaching England and Canada in 1971. Minichamps commemorates the winner of Mont Tremblant 1976 (417762069) - Gilles Villeneuve for the Ecurie Canada - with the modelcars of the March 76B Ford-Cosworth and the cars of the same type by James Hunt, third place finisher of the GP De Trois-Rivieres 1976 (417762096 ). The modelcars made out of high-quality resin are limited to 250 units each. A car from the recent past are the models of the Alfa Romeo Sauber C37 2018 by Charles Leclerc in 1:43, whose popularity is probably the reason that these appear in an edition of 920 pieces (417180416).

Finally we hear Toto Wolff again, to whom there are also new news. As the British portal RaceFans.net reports, Wolff is to exchange his post as Mercedes team boss for an even higher one after the 2020 season. Allegedly, he is to become the new CEO of F1 owner Liberty Media; a rise to the top of the entire Formula 1. But what says the motorsport boss of the brand with the star currently for the upcoming Grand Prix of Spain? "Despite the good start to the season, we remain skeptical about our performance, aware that we can and must improve in a variety of areas, which is why we expect a hard-fought weekend in Spain, against our opponents, but also between our drivers. This season everything is still in it and we will give everything, "said Wolff.