With new modelcars of the famous 24-hour race at the Sarthe in scale 1:43, the team led by Hugo Ripert connects the decades 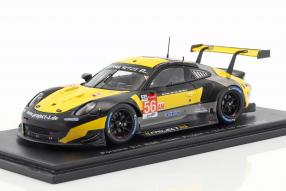 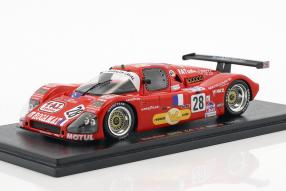 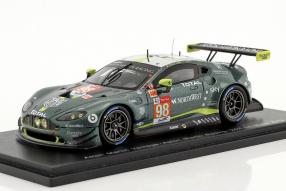 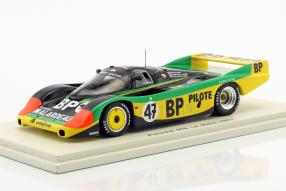 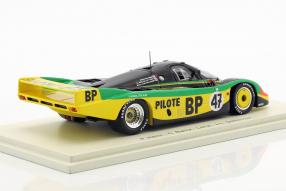 60 starters and 10 reserve vehicles are included in the starter list, which was published by the Automobile Club de l'Ouest as the organizer of the 24 Hours of Le Mans on March 1st, 2019. Eight cars in the LMP1, 17 in the LMP2 and all other racing cars are divided into the categories LMGT-AM and LMGT-Pro. Four Porsche 911 RSRs from the factory Porsche GT team will once again compete at the race: again in the retro paintworking of the pink colored Porsche 917 Pink Pig from 1971 and the imitated Rothmans design? This year's edition of the traditional race will be on June 15th and 16th; it is the 87th edition. Last year, Toyota finally managed to win with the TS050 Hybrid, the start number 8 and Sébastien Buemi, Kazuki Nakajima and Fernando Alonso.

60 starters and 10 reserve vehicles - it means that Spark and its company founder Hugo Ripert can draw from the full again, which concerns the role models for new modelcars. Because one look in our webshop shows: Le Mans and Spark are two inseparable partners. The label also knows how to fill every conceivable gap in its product range and can look far back into the starting fields of the past to find new templates for attractive miniatures. Some of them - quite colorful - have reached us in the past week. We look at the highlights: These are certainly the project 1 Porsche 911 RSR of Jörg Bergmeister, Patrick Lindsey and Egidio Perfetti, who drove on the 35th place in the overall standings in front of 269,500 spectators. The best 911 RSR finished 15th there.

We especially like the yellow-black Project 1 Porsche, which is available under the item number S7038. Not less attractive is the nine-eleven from Ebimotors, a 911 RSR, who even finished in 32nd place with Fabio Babini, Christina Nielsen and Erik Maris. Sadly, Paul Dalla Lana, Mathias Lauda and Pedro Lamy did not finish with the Aston Martin Vantage GTE of Aston Martin Racing; the attractiveness of the models, made out of high quality resin plastic does not detract. In terms of material as well as finish and workmanship, the Aston Martin shines with superbly made decoration and perfectly crafted details, both outside and inside. You can not do without him when it is about to completing the starting field.

We jump further back in time with the Sauber SHS C6 of Roland Basseler's team, which started with the drivers Patrick Bourdais, Jean-Louis Capette and the team owner himself in 1993 at the Sarthe (S4084), but failed after 166 laps. In a similar constellation, the team Preston Henn T-Bird Swap Shop with Preston Henn, Jean-Louis Schlesser and Claude Ballot-Lena launched the Porsche 956 in 1983; a likewise very colorful car as the model (S7503). However, the American private team achieved the 10th place! Laurent Aiello, Allan McNish and Stephane Ortelli drove the Audi R8 of Audi Sport Team Joest to the second place in Le Mans in 2000; the yellow-silver racing car, which Minichamps set a memorial out of diecast at this time and now Spark (S3698). Our conclusion: Thanks @Spark!

Here: Click to the miniatures from Spark to Le Mans in 1:43