KK-Scale delivers the wonderful diecast models to the type T1 of the Stuttgart, which remind in scale 1:18 of a popular van and minibus 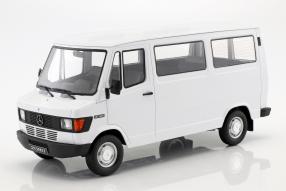 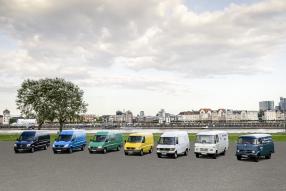 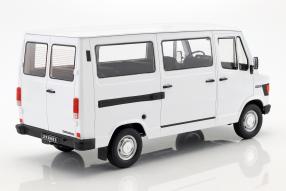 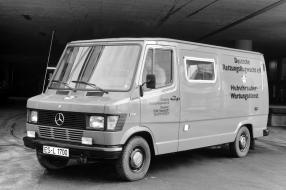 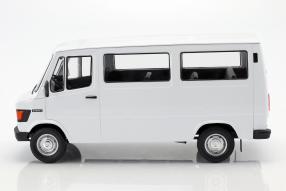 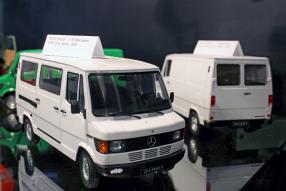 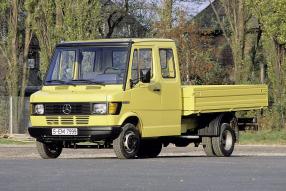 For todays thursday, the Throwback Thursday, we want to devote ourselves to the Mercedes-Benz with the sales name 208 D, to which we met a very beautiful model in 1:18 format already at the Nuremberg Toy Fair. Now in front of us on the table is the minibus of the series, which Mercedes-Benz internally designated T1. This series was built in the years from 1977 to 1995; until 1984 in Bremen, which gave her the nickname Bremer Transporter. The exterior designed by designer Stefan Heiliger picks up on the clear lines that used to be standard at Mercedes-Benz and does not forget to attach the beveled turn signals to the side of the headlights. A touch of S-Class W 116 and W 126 even at the vans. The makers of the modelcar have hit the look of the minibus perfectly and transferred it to the scale 1:18.

For Heiliger himself, it was the last work for Mercedes-Benz: He left the company and founded his own studio in 1978 in Frankfurt with Heiliger Design, with which he focused on the design of seating. Already in 1974 he received teaching assignments at the university for shaping Offenbach, where he became a professor in 1979. The armchair Rolf Benz 3100 designed by Heiliger has been produced for over 20 years and is regarded as a classic. Its T1 was the first pickup truck developed by Mercedes-Benz without resorting to components from its predecessors from the Hanomag era. As usual in this segment, the series consisted of the versions station wagon, minibus, van and flatbed. In addition, there were dump trucks and even chassis without construction; even a complete cab could be waived.

Mercedes-Benz offered three wheelbases: 3.05 meters, 3.35 meters and 3.70 meters. The permissible total weight ranged from 2.55 t to 4.6 t. As type of driving it were diesel and gasoline to choose from. The role model of our model car with the designation 208 D was powered by the diesel engine of the type OM601: A series four-cylinder, which drew from its 2.3 liter capacity 58 kW / 79 hp. The automatic version made 60 kW / 82 hp. The maximum torque is 157 Newton meters (Nm). From this drive source we see nothing in the modelcar with the item number KKDC180291, since the hood stays closed. But the miniatures score with extremely well elaborated details such as the radiator grille, the ventilation slots underneath, the iron door handles and steel rims. A role model that we all certainly remember; a model that reminds us of the great 1980s.