The line of exclusive motorsport cars will be continued: With the now released car, of team Dick Barbour Racing in 1:18, after a role model from 1979, it goes to the USA 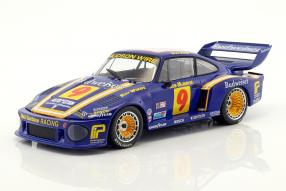 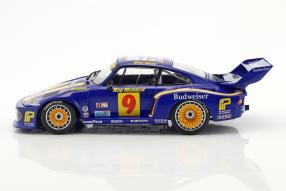 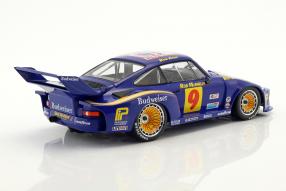 An exclusive modelcar is the Porsche 935, only availabel at modelissimo and CK in scale 1:18, with which Dick Barbour Racing participated at the 24h race of Daytona in 1979. For the steering of the race car, the drivers Bob Akin, Rob McFarlin and Roy Woods were registered. So lets take a closer look at the team owner Dick Barbour, whose name is not very familiar in Germany. Barbour is vintage 1940 and started his motorsport career synchronized to his foundation of a tuning and service shop for Porsche cars. As a race driver, he has started his career in a Lola 1968; in 1969 he also changed in this segment to Porsche, raced the 904 and from 1971 the Porsche 908/02 Spyder. After some years of a break, he then acquired the role model of our modelcar, a Porsche 935/77A.

Its 2,85 liter six-cylinder-boxer engine performed 433 kW / 590 PS, which was shifted by a four speed transmission. Competing in the GTX class and after 117 rounds, the team was counted with the 52nd place of the overall ranking: The 17th version of the 24 hours race in Daytona - as the 17th Annual 24h Hour Pepsi Challenge in the statistics - took place on the 3rd and 4th of february 1979 at the 6,180 km Daytona International Speedway. Other datas describe the race as the 18th version. For Dick Barbour as the team boss, it should not mean the end of his career. In the summer, he and his team repeated the last year's success with the fourth place at the 24 hours of Le Mans with a second overall place and the IMSA class victory. In 1980, Barbour had won Sebring, Riverside and Mosport with a 935K3/80.

With the second place at the 500-mile race of Road America 1980, Barbour hung the helmet on the nail, but remained further active as a team boss. Norev has dedicated the appropriate model of the Porsche 935 of the 24 hours of Daytona in 1979 in cooperation with the above-mentioned specialist dealers, which was produced out of diecast in an edition of 1,000 units and matches exactly the appearance of the prototype. This special model is available under item number 187434 and has steerable front wheels. The Porsche 935 was a racing car that started under the regulations of Group 5 in the years 1976 to 1981 and whose basis had been the Porsche 930; but this is better known as the first Porsche 911 turbo. In the brand world championship, the factory team used the 935 with the 2.9 liter turbo until 1978. After that, the car was used by private teams.

Here: Click to the special model of the Porsche 935