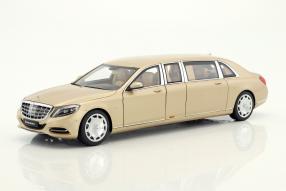 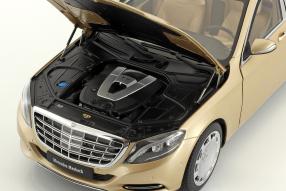 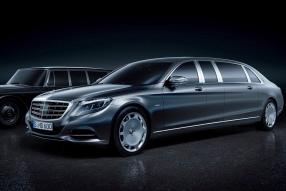 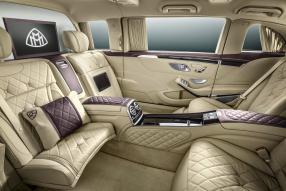 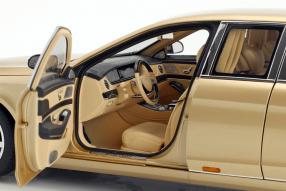 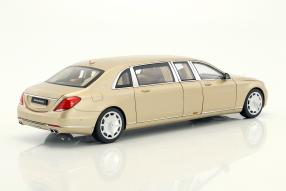 The Stuttgart-based car manufacturer Mercedes-Benz operates at full steam the expansion of its upper end of the model range and presented under the sub-brand Mercedes-Maybach a stretched version of the top model of the S-Class: For the 50th anniversary of the Mercedes-Benz 600 presented the Daimler AG on the Geneva Motor Show the new Mercedes-Maybach S 600 Pullman. Measuring a full 6.50 meters in length, the luxury saloon takes on the role of the absolute top model with a vis-à-vis seating arrangement behind the cutting disc and thus succeeds the once-popular Mercedes, especially among governments, crowned heads and world stars such as the unforgotten Udo Jürgens Mercedes 600. Autoart – in its own writing AUTOart - has brought out a surprisingly well-made model cars in the scale 1:18. We want to look at the model along with the prototype.

Let's have a look under the hood of the model and the original. That is possible because the diecast miniature offers all-around opening hoods and doors. Let's start with a look from back to front: The V12 twin-turbo engine of the Mercedes-Maybach S 600 Pullman develops an output of 390 kW / 530 hp from a displacement of just under six liters. The maximum torque is 830 Newton meters (Nm) from 1,900 rpm. From the world's best engine technology, isn’t much to see in the model car, because as on the prototype, large plastic covers dominate the look under the hood. The grille mask convinces with an opulent design, which we can attest to in the model to a high degree of original fidelity. It does not need to be mentioned separately that the interior of the headlamp corresponds exactly to that of the prototypes.

Mercedes-Benz cars have been forming the fleet of wealthy people for many decades; Film stars, kings and heads of government showed and show their love for Mercedes-Benz. With the comeback of the Maybach brand in 2002, the Daimler AG wanted to counteract the feared backlog over the new models of Rolls-Royce of the BMW Group and the new Bentley cars from the VW Group. However, the Maybach S 57 and S 62, which were produced until 2012 and felt by many customers to be too lukewarm, were unable to build on the reputation of the legendary Mercedes-Benz 600. This is now trying in the second attempt the new Mercedes-Maybach S 600 Pullman, which once again increased by 1.053 meters compared to the basic version presented in November 2014.

Maximum luxury in the interior

The wheelbase of Pullman is 4.418 meters; At 1,598 millimeters, it is over 100 millimeters higher than an S-Class. These leads, so the manufacturer, to a tangible increase in headroom. Of course, the longer wheelbase benefits the fund in the first place. There is a spacious and sophisticated club lounge with many standard amenities. The chauffeur-driven limousine meets the modern demands of the highest exclusivity and luxury. The VIPs travel in the direction of travel on two standard executive seats. You can look forward to the greatest legroom in the segment and a very comfortable entry and exit. In the rear, four passengers can sit behind the electrically lowerable partition, which is typical for the Pullman cars.

Pullman cars originally referred to luxury-class passenger railcars manufactured by the American Pullman Palace Car Company. The two first-class travelers in the rear can not only claim the greatest legroom in this class, but also more than 60 millimeters more headroom than in a Mercedes-Maybach S-Class. As standard, the Pullman has a fully leather-lined interior. In addition to the headliner, door frames and seat consoles are upholstered in fine leather. In the headliner, three analogue instruments provide information about the time of day, the outside temperature and the speed. The disc of the partition between the driver's seat and the rear can be switched from transparent to opaque at the touch of a button.

Not the first Pullman

Already the type 300, popularly called "Adenauer-Mercedes" was brought in 1960 as a special order in three copies on the Pullman measure. Pullman versions were also available from the S-Class W 109 and W 126, as well as from the W 140 and W 220. Naturally, Autoart's model cars are just as sophisticated, with curtains and superbly recreated details in the interior. The finish of the impeccably crafted body topped everything so far. The chrome edging of the glazing, the iron door handles and the details of trim elements, instrument panel and seats are sure to impress. Otherwise, we would not have accepted that all doors are to be opened. But Autoart knows what the fans want. The fact that these 37-centimeter-long models cost a little more, is clear: even the model costs just under half a million euros.