While the sports-car manufacturer concentrates on thier engagement in the LMGT-Pro class, BBR holds on to the time with porsche in the highest class in 1:18 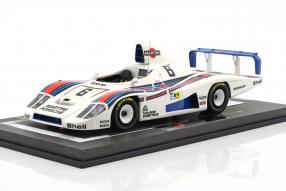 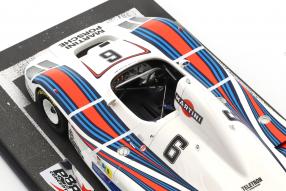 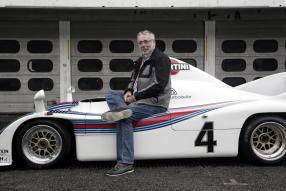 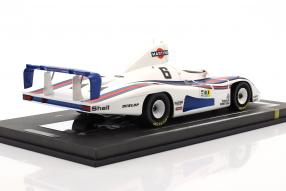 The flood of innovations for model cars in the field of motorsport and Porsche does not stop. This is also because the Stuttgart sports car manufacturer wrote history through its 19th wins at the 24 Hours of Le Mans. The model for a vehicle that basically won the Sarthe, but finished only 2nd in this version, now reaches us from the small series manufacturer BBR: a model of the Porsche 936/78, limited to 200 units, with the drivers Bob Wollek, Jürgen Barth and Jacky Ickx for the Team Martini Racing Porsche System went into the race and finished it after 364 laps behind the victorious Renault Sport Alpine A442B. Five more Porsche were in the top ten. Exactly today in three months, on 16 and 17 June 2018, the 86th edition of the traditional race starts at the Circuit des 24 Heures.

Unfortunately, Porsche no longer plays any role in the highest class of this year's FIA World Endurance Championship because the use of the Porsche 919 hybrid in the LMP1 is history. The Stuttgarter under the name of the Porsche GT team will however uphold the flags of the company in the class LMGT-Pro with four adapted Porsche 911 RSR GTE. Exactly 40 years ago, the car maker put its hopes on three Porsche 936 and one 935. The 936 was developed according to the then valid Group 6 regulations. Three copies were built. Joest Racing and Kremer Racing each built another vehicle. The 936 was used from 1976 to 1979 and 1981 and won the 1976 Sports Car and World Championship. A polyester plastic skin was installed over the aluminum mesh tube frame of the open Spyder.

Under the disguise tinkered a six-cylinder boxer engine, which was supported by one or two turbochargers depending on the year. The prototype of our model of the 1978 version was powered by a 2.1 liter engine with two turbos, which could rely on air / water cooling. Two camshafts per cylinder row drove four valves per cylinder, for which the air cooling was no longer sufficient. Therefore, the cylinder heads received a water cooling. In the end, the drivers had 426 kW / 580 hp; managed by a five-speed manual transmission. The top speed is handed down at 360 kilometers per hour. Compared to their predecessors, the 936/78 had an especially rear and sides modified body.

Details of the prototype well hit

BBR has perfectly converted the extended, to the end strongly tapered tail as well as the adjustable rear wing bent downwards on the outsides perfectly in the scale 1:18. Also, the new air opening on the two side surfaces in front of the rear wheel for better cooling of the rear brakes has reduced the small series label correctly. The look of the high-quality resin model fits perfectly with that of the prototype, because of polyester made of very similar material. The cockpit is a real highlight for racing car fans. In addition to the model of the runner-up 936/78 with the article number BBRC1832B, the car of Jacky Ickx, Henri Pescarolo and Jochen Mass is also available (BBRC1832A). With these models, the legendary time of Porsche in the highest class of Le Mans still continues to count, despite leaving the LMP1.