Spark and Audi have again proven to be a good team and craeted a lasting memory of the winning car from last year&#039;s traditional race. 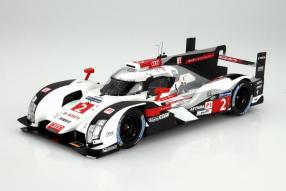 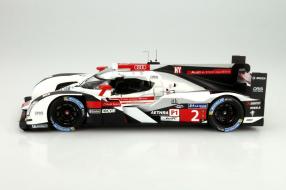 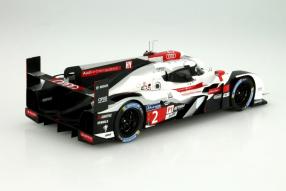 The 3rd edition of the 24-hour race of Le Mans will take place from 13 to 14 June 2015 at the Circuit d 8es 24 Heures. This is not long from now; in almost exactly 4 weeks, we know who will be the winner of the traditional race this year. But before that lets begin with the new, almost a world champion like  model car of the winner of the 24-hour race in 2014, the Audi R18 e-tron quattro of Audi Sport Team Joest: André Lotterer, Marcel Fässler and Benoit Treluyer have the model for the Miniature brought safely through the night. The model of the Audi R18 e-tron RP4 1:18 comes from Spark and thus probably the fastest and most experienced label in this area. The team led by Hugo Ripert supplies, under item number 5021400215 and for 179,95 Euro, a consistent in every detail image of the winning car. While carrying a well-known name, it yet came out  2014 as a completely new car. Designed for the LMP1 regulations decreed the model to the model presented here by car via a modified V6 TDI, which had been initiated against the predecessor to score with a reduced consumption by 30 percent.

Measures to reduce fuel consumption visible even in the model


The fuel savings could be achieved by measures that took  influence on the design of the replica in size 1:18. For example, the ride height  was built narrower by 10 centimeters. The front wing got  a flap instead of a front diffuser, the rear has a 20 centimeters wider spoiler. The height of the R18 e-tron quattro also increased;  the racing cars reaches a total of 1.05 meters. The modelcar fan will noz notice the  reduced gross weight of 870 kg - Net weight 760 kg  or the tag lines for the front wheels or the reinforcement of the monocoque. Audi refers to the vehicle as the most complex race car, which the company had ever built in Ingolstadt. The drive power of 397 kW / 537 hp is supoossed to be higher than officially stated. The electrical system is intended to provide more than 170 kW / 230 PS of it. The motor draws its power from a capacity of 3.7 liters. On average, the team Lotterer, Fassler and Treluyer was on the road for 214.900 kilometers per hour, reached a distance of 5167.130 kilometers and turned 379 laps in  24: 01: 59,830 hours.


The model has a length of about 25 centimeters and weighs approximately 1,555 grams, including packaging.Anyone  who examines the harsh rugged surface of a Le Mans racing car from the classes LMP1 and LMP2 perhaps understands why resine plastic is the number one choice for the production of a racing car model: Resine is easier to handle in the production; difficult shapes are easier to implement with it,  also economically better than zinc die-cast. This feature has helped the creators of Spark with the R18 e-tron quattro 2014 because a view of the side panels shows how detailed a body of a racing car of this class is designed today. The team of company founder Hugo Ripert has been able to portray a winner with this model. No wonder, since the founder of Spark gained his professional experience through the previous tasks in the development of miniatures for Vitesse, and Quartzo Ixo.