The lap times of the cars he transported would not be achieved by the Fiat Iveco 190, but in the set in 1:43 scale, brings our heart rate to full speed 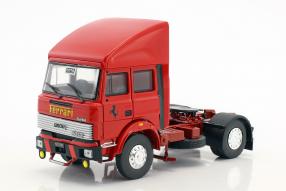 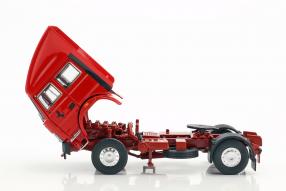 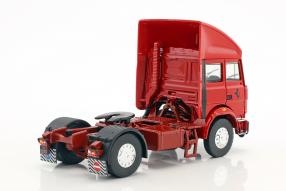 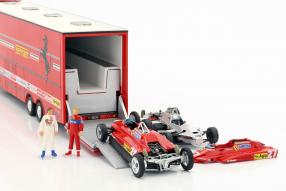 Trucks play a rather subordinate role in our blog, but for all those of you whose heart beats for Formula One, today we have a very special treat: The long-standing tradition rich model car label Brumm has a scale of 1:43 brought out a Fiat Iveco 190 with semitrailer semi-trailer, as he has delivered in 1982 the cars of the Scuderia Ferrari to the racetracks. The price also includes miniatures of the drivers Gilles Villeneuve and Didier Pironi of the type Ferrari 126C2. The model cars naturally roll on the narrow transport wheels, otherwise they would not be able to drive over the fold-out tailgate and their ramps and would not fit into the trailer from the width. Brumm has thought accordingly and adds the appropriate tires for the racetrack.

For over 20 years, Brumm has been a household name for fans of car models based on models from Formula One. The brand has always been dedicated to racing cars from long gone eras. The cars of Ferrari, Auto Union and Mercedes-Benz are among the preferred models. With the set presented here, Brumm recreates the Fiat Iveco 190 and the previously mentioned Ferrari 126C2, starting with numbers 27 and 28 in the decoration, in which they entered the Formula 1 San Marino Formula 1 Grand Prix in 1982. The set is available under article number RTS05G and mainly made of diecast. It includes the race transporter, the two emergency vehicles, two front lugs, two rear wings, four side skirts, an eight-wheel set of tires and the figures of the drivers Gilles Villeneuve and Didier Pironi with their helmets.

This set is accompanied by a numbered certificate. The particular attraction of the models lies in the fact that they are not just images of the originals, but also miniature-modeled miniature works of art. The tractor, for example, has a tiltable cab, under which a meticulously reproduced engine is inserted. The truck technology is therefore just as recognizable as the chassis of the trailer. In the design of the interior, this corresponds exactly to the look of the racing model. But the Formula 1 cars have it all: their disguise is removable. Underneath, the fan discovers the monocoque, which was still made of aluminum at that time, down to the last corner, true to the original. Like the V6 turbo engine.

The collector will find in this set so a kind of model making, as they can not be found at present models: A Ferrari SF70-H from 2017 in 1:43 with removable engine cowling is not available. In this respect, the model cars by Brumm from this era are much more desirable because the collector benefits from the attention to detail. The figures of Pironi and Villeneuve seem a bit pale-faced, but maybe the race was too exhausting: The team won on April 25, 1982, the double victory. Didier Pironi won in front of about 70,000 spectators at the Dino Ferrari Dodiac with 1: 36: 38,887 minutes ahead of his team-mate Gilles Villeneuve; also delivering the fastest lap. A great weekend dedicated to a truly memorable memento with the exceptionally great set by Brumm.

Here: Click for the Set Ferrari Race Transporter 1982 in the shop